Fourteen fire tenders and two rescue vans were rushed to the spot. 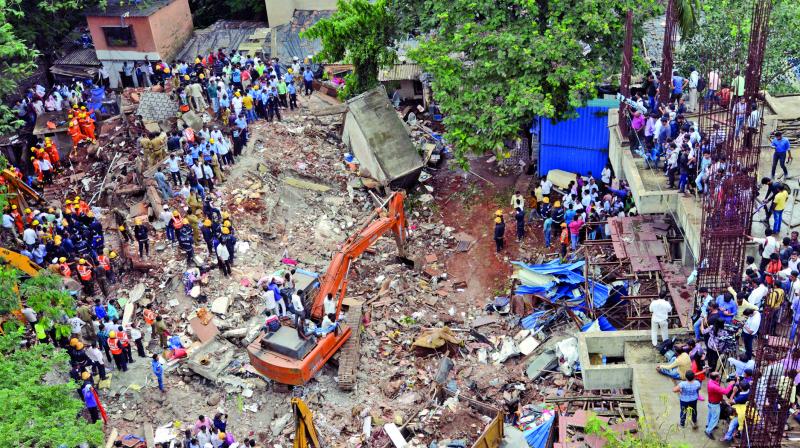 Mumbai: Twelve persons were killed, including a 3-month-old baby and five women, and five more are suspected to be trapped in the debris after a four-storey residential building collapsed in Ghatkopar on Tuesday morning.

Thirteen people were injured in the incident. Bharatiya Janata Party (BJP) leader Balchandra Shirsat, a former councillor from 'N' ward, where the building is located, said the building collapsed after unauthorised alterations were allegedly made in the nursing home located on the ground floor on Monday night. Mr Shirsat said two pillars had been allegedly razed in the nursing home, which is under renovation, to make way for a guesthouse.

The nursing home is owned by the husband of a political activist. Fourteen fire tenders and two rescue vans were rushed to the spot and rescue operations were underway at the site of the building, which is called 'Saidarshan', according to the fire brigade.

Chief minister Devendra Fadnavis announced in the Assembly that a probe under Brihanmumbai Municipal Corporation (BMC) chief Ajoy Mehta would be conducted regarding the collapse. Mr Mehta has been asked to file his report in 15 days.

Saidarshan collapsed around 10.30 am on Tuesday. The fourth floor broke down first and the entire building came crashing down in seconds, said Ratna Katwa (60), who lives in the opposite building. "The building fell with a huge sound and I all could see was dust all around in the next few seconds. I saw a woman with two girls standing in the building compound when the entire structure collapsed," said Ms Katwa. In the rescue operation undertaken by the National Disaster Response Force (NDRF) and fire brigade, a total of 19 people and two firemen were rescued. The building housed 15 families altogether, with three flats per floor.The ground floor of the building was being utilised as a maternity hospital - 'Shitap Hospital' - but it was not functional for the past one month, locals said. Some residents of the locality said the structure was 35 years old and despite this, had not been given any notice by the BMC. They also said the renovation work in the nursing home was allegedly undertaken illegally.

“If any BMC official has passed this work without needed consultation then action would be taken against him. The BMC had no information about such construction and no notice was given to this building. Investigation will be held in full swing," said mayor Vishwanath Mahadeshwar.

Meanwhile, housing minister Prakash Mehta has notified that all the buildings in the Damodar Park area, in which Saidarshan was located, do not have Occupancy Certificates. Hence, an inquiry will be held against all the other buildings too, he said.