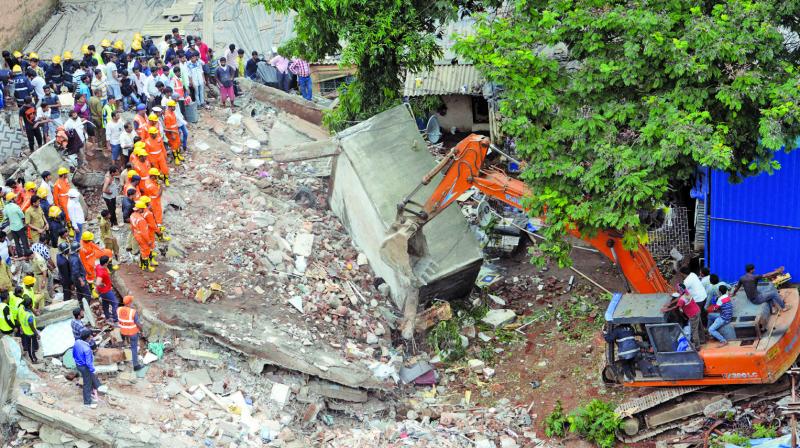 Rescue personnel carry out operations at the site of the building collapse in Ghatkopar; (right) Authorities inspect for survivors trapped in the debris. (Photo: Rajesh Jadhav)

Mumbai: Twelve people were killed after a building collapsed in Ghatkopar on Tuesday. Thirteen people were injured. The collapse could have cost many more lives had there been no hospital near the building. Twenty persons, including two firemen who suffocated due to a gas leak, received treatment at Shantiniketan Hospital. Initially, eight injured patients were shifted to the civic-run Rajawadi hospital after the building collapse. Out of eight persons, four were declared dead on arrival. While two women patients are stable and recuperating and two were discharged after receiving Out Patient Department (OPD) treatment.

The residents alleged that the building collapsed due to repair work being undertaken on a ground floor nursing home owned by a Sunil Shitap.

He also allegedly owns illegal shops and various hotels. The pillars of the structure were damaged due to the repair work, claimed the residents of the building.

A huge crowd gathered at Rajwadi and Shantiniketan Hospital. Municipal officials said the building housed a nursing home, but it was being renovated and so did not have too many patients.  “During the rescue operation, two of the fire brigade’s personnel were also injured. Due to the gas leakage, firefighter Ganesh Khandage suffered breathing issues and was rushed to Shantiniketan Hospital. He was admitted to Intensive care unit (ICU) and is stable,” said, P.S. Rahangdale, chief of the Brihanmumbai Municipal Corporation’s (BMC) fire brigade department.

Dr Vidya Thakur, superintendent at Rajawadi Hospital said, “As soon as we got the news our team rushed to the spot. We are ready with all our amenities. Till now, eight are dead.”

DCP Sachin Patil said, “We have registered an Accidental Death Report. We are investigating and soon we will take further action against the culprits.”  He added, “On Tuesday, around 10.40 am the police received a call from the control room, stating that a building at Damodar Park had collapsed. More than 50 police officials rushed to the spot. We immediately took injured to the hospitals.”

Dr Rita Savla of the NGO Radhee Disaster and Education Foundation said, “I was at the spot. Our team was helping fire brigade officials. There was construction work underway on the ground floor. How could any interior decorator approve a design that would break the building’s pillar?