Kumar said, “We had been receiving several complaints against him and were investigating his involvement in the cases.” 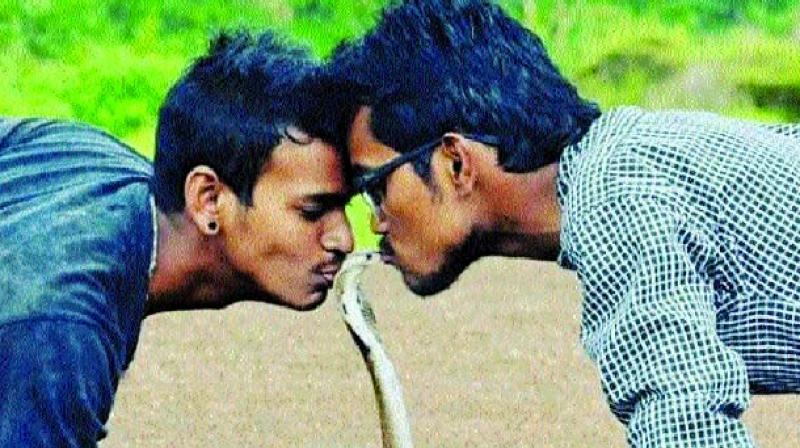 Ajay Pawar (right) was questioned after he had tried to kiss a cobra in October last year .

Mumbai: In the first of its kind, the state forest department has arrested an amateur snake catcher, Ajay Pawar, a Panvel resident, for allegedly performing stunts with snakes and posting these pictures on social networking sites. With this arrest, the department aims to send out a stern message to all those who perform stunts with wildlife and indulge in illegal activities.

Pawar, who was charged under Sections 9 (purchase or capture of any animal), 39 (hunting an animal) and 48 Wildlife Protection Act, 972, was produced in Panvel court on Thursday, after which he was remanded to police custody till May 30.

The Panvel Forest Department which had been monitoring Pawar’s movements, raided his residence on April 26 after the Organisation for Wildlife Studies (OWLS), a Mahad based NGO, produced evidence of his illegal activities.

Chief Conservator of Forest, Thane Territorial, Sunil Limaye, had alerted the Alibaug team. Manish Kumar, Deputy Conservation of forest (Alibaug) had asked his Range Forest Officer (RFO) Shivaji Thackeray to submit a detailed report of the raid. Kumar said, “We had been receiving several complaints against him and were investigating his involvement in the cases.”