Rs one clinics at five CR stations closed for 16 hours

The organiser, MagicDil, claimed that the railways asked it to demolish a pharmacy that cost nearly Rs 8 lakh to build at Dadar 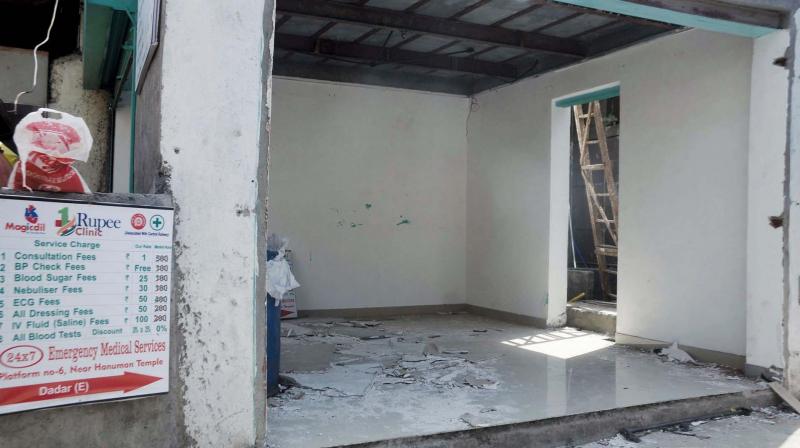 Mumbai: The railways’ dream of one rupee emergency medical rooms (EMRs) at suburban stations among others hit a temporary road block, with the organiser shutting these down at five stations including Dadar, Kurla and Vadala for nearly 16 hours on Wednesday and Thursday over differences with railway authorities.

The clinics were reopened at 4pm on Thursday after pressure from the central railway (CR). The railways however stuck to its stand that the contractor/organiser was at fault and the pharmacy had been illegally constructed at Dadar. Notwithstanding that the clinic was inaugurated by union minister Suresh Prabhu and had genuine patients turning up.

MagicDil raised a storm Wednesday night and throughout the next day after it refused to take any patients till such time the CR sorted out the issue. In the bargain, the common man visiting the clinic was left high and dry.

One Sidhart Surwade (62) who lives opposite Kurla station visited the clinic at Kurla station to have his blood pressure checked as he was feeling a little under the weather. “It is unfortunate that railways is not able to handle a facility started by it. I am basically a heart patient and when I heard that the railways would be providing medical facilities to anyone at one rupee, I came for a check-up,” he said. While the clinics have been started for commuters who may get injured during accidents, the railways is allowing them to take on anyone who may be ill.

The man in the eye of the storm, Rahul Dhule, who is the chief medical officer and partner in MagicDil, which won the contract after CR floated tenders, agreed that the pharmacy at Dadar was not part of the contract but was quick to add that CR officials had been informed about it.

“The construction of the pharmacy was going on for two months, so we did not hide anything,” he said, adding that the pharmacy was part of the revenue model as sales from it would be used for paying salaries of doctors holding MBBS degrees. “If there is no pharmacy, there will be no money coming in and consequently, no services costing just one rupee for people who come here. This has left us in a fix,” he said.

CR chief public relations officer Narendra Patil however said that the pharmacy was illegal and the organisation was well within its rights to ask MagicDil to demolish it. “We understand that the pharmacy might be a part of their revenue model but the fact is that they had no permission and anyone who works with a government organisation has to work within a set of rules,” he said.