The animal, which had separated from its pack, was chased by an angry mob of people. 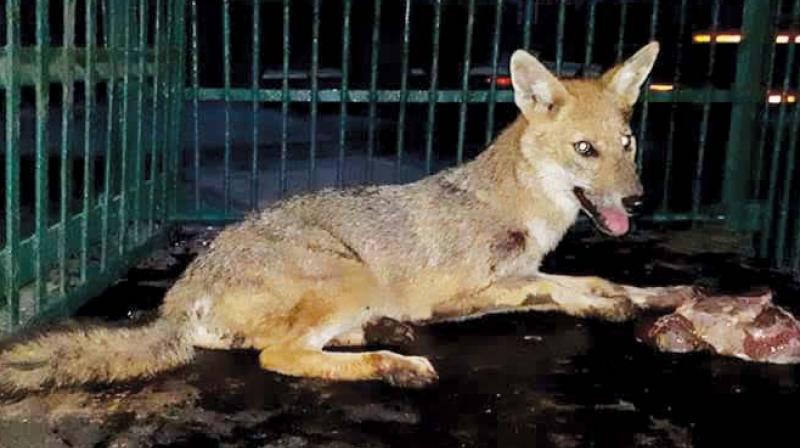 The jackal that was rescued in Vikhroli.

Mumbai: In the second incident within a month, a sub-adult golden jackal was rescued from the staff quarters of Godrej in Vikhroli, Wednesday evening. The animal, which had separated from its pack, was chased by an angry mob of people. But a timely intervention by the Resqink Association of Wildlife Welfare (RAWW) NGO ensured that the mammal was rescued and rushed to Sanjay Gandhi National Park (SGNP), where the vet found him to be weak with a minor wound.

The jackal was spotted in the evening being chased by dogs, after which it slipped into Pirojshanagar Creekside Colony, which shares its boundary with a mangrove habitat. Trying desperately to escape, the animal then fell into a deep pit, where it suffered a few injuries. “It was then that a distress call was made by the residents to RAWW, the wildlife rescue and rehabilitation NGO, who took appropriate measures for its rescue and treatment with due permission from the forest department,” said an official from Godrej.

In an operation lasting 20 minutes, the jackal was transported in a fibre cage to SGNP where it is being kept under observation. The park veterinarian Dr. Shailesh Pethe, who examined the jackal said, “The animal appears to be little weak and has a wound on its right shoulder. He will be here for at least a week after which a decision on releasing the animal will be taken by the range forest officer of the city.”

“We will soon be getting in touch with the authorities at Godrej as well as the forest department to host awareness programmes for the security of the residents of the colony as well as nearby areas where jackals are spotted,” said Pawan Sharma, Founder of RAWW.