Minister at wedding of don’s kin 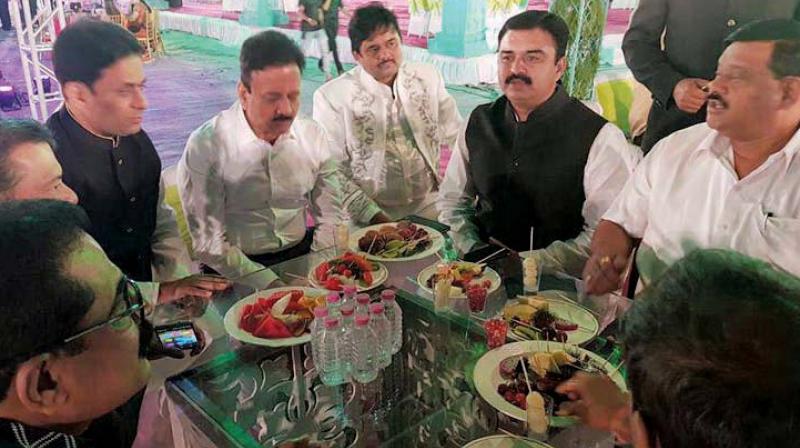 Mumbai: The ‘D’ word has returned to haunt the Bharatiya Janata Party (BJP) once again. State irrigation minister Girish Mahajan has come in the line of fire for attending the wedding of a distant relative of underworld don Dawood Ibrahim in Nashik along with three MLAs, the mayor and deputy mayor of Nashik. Chief minister Devendra Fadnavis has asked for a report in the matter. Furthermore, ten police officers — including an assistant police commissioner — attended the wedding, and the Nashik police commissioner, Ravindra Singhal, has ordered an internal inquiry against them.

The BJP maintains that Mr Mahajan’s clarification — he has told his party that he had attended the wedding on receiving an invitation from the bridegroom’s father and he was clueless about the bride’s family — is sufficient.

Opposition parties, however, have demanded an investigation into the matter. On May 19, Mr Mahajan, who is the guardian minister of Nashik, attended the wedding of the son of Hasif Hisamuddin Khatib, a religious leader. Khatib’s son was wed to the daughter of Nashik resident Jaggi Kokani. Mr Kokani’s elder daughter is married to the son of Dawood’s younger brother Iqbal Kaskar.

Demanding a probe against Mr Mahajan, Congress spokesperson Sachin Sawant said, “He (Kokani) may be a distant relative of Dawood, but he is allegedly involved in betting. Senior politician from the city must have been aware about it. That’s why Mr Mahajan and the three MLAs must be probed in the matter,” said Mr Sawant.

Meanwhile, BJP chief spokesperson Madhav Bhandari said, “Mr Mahajan has explained himself. The party has nothing more to say. If anything more needs to be done, Mr Fadnavis and the party’s state president (Raosaheb Danve) will do it.”