The Tejas Express was found damaged by passengers after its first trip. 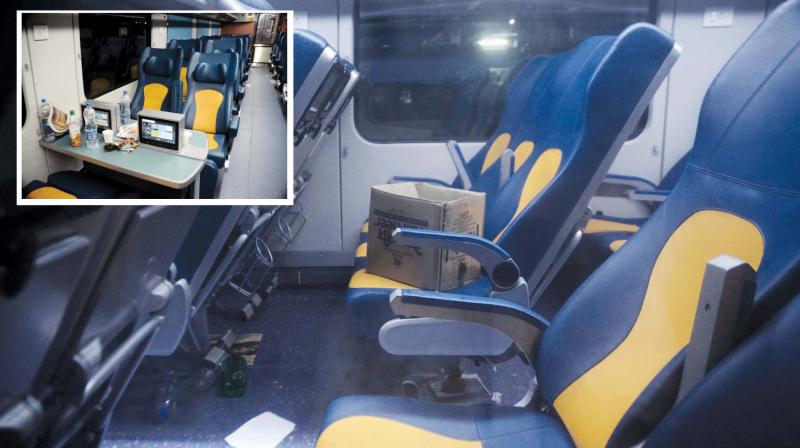 The Tejas Express’ floor is strewn with wrappers, tea cups and water bottles. The train arrived at CST from Goa on Wednesday night. (Photo: Shripad Naik)

Mumbai: Railway officials have said that around 400kg of waste accumulates after a single long-distance train journey. The issue of commuters misusing facilities provided to them came to fore after the Tejas Express, a semi-luxury train started on the Mumbai-Goa route, was found damaged by passengers after its first trip.

The Asian Age had highlighted in a report published on Thursday (India’s first semi-luxury, Tejas Express, vandalised on its first journey) the fact that commuters had been littering liberally all over the train while it was returning from its maiden journey. Additionally, people had also tried to un-hinge the screws with which LCD televisions were fixed on the back of each of the 992 seats.

However, officials have come out and said that when a train finishes its journey and comes to the pit for maintenance before it departs for its next run, the crew empties out almost 400 kg of trash. An official from the maintenance department said, “I have been a part of the cleaning department for the past five years and whenever a train comes to Mumbai, no matter from where, it is filled with leftover eatables, banana peels, cups, wrappers and plastic, among other things.” He added that it takes at least a crew of 10 people to clean out a long-distance train, which has around 20 coaches. “The cleaning of the train take a lot of time and, of course, due to the fact that around 350-400 kg of thrash is lying on the floor, we might not be get everything in time.”

The Central Railway (CR), which runs the Tejas Express, sees around 60 long-distance trains departing and docking at Mumbai’s stations.

Central Railway (CR) chief public relations officer, Narendra Patil on Wednesday had appealed to the public to maintain civic sense aboard the Tejas Express. “We, the Indian Railways, want to appeal to the people of India to use these facilities with a sense of responsibility. After all, the railways belong to us and not just the government. And Tejas is something we are really proud of as a nation, hence it is our humble request that passengers keep the railways as clean as their homes,” he had said.