An official said that the chopper had DGCA clearance before flying and was very much in use by the state VIPs and the Chief Minister. 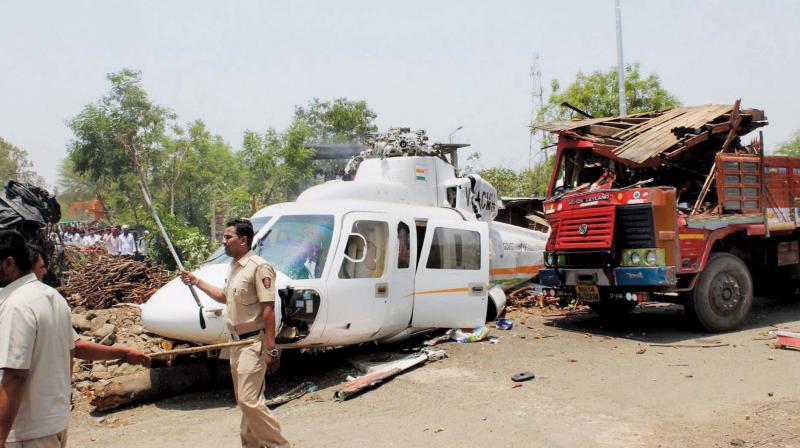 Image of the chopper after the crash on Thursday.

Mumbai: Questions are being raised about the safety of VIP flyers after Maharashtra Chief Minister Devendra Fadnavis had a narrow escape from a helicopter accident on Thursday. Despite having a clearance certificate, the government owned Sikorsky (VT-CMM) helicopter met with an accident in Latur. Aviation experts feel the accident may have been caused due to variable wind direction and have called for the need of proper infrastructure.

Sources in the Directorate General of Civil Aviation (DGCA) have termed the accident as ‘serious’. An official said that the chopper had DGCA clearance before flying and was very much in use by the state VIPs and the Chief Minister.

Hailing the pilot’s presence of mind in the situation, Mandar Bharde, MD of MAB Aviation, said, “The pilot showed exceptional skills and saved the travellers on board. There was a possibility of the rotor catching fire, which could have toppled the entire helicopter but the pilot avoided the situation. The Maharashtra Government should ensure proper infrastructure like helipads, for safe landing and take-offs.”

Mr Bharde shared that around 15 choppers take off and land in Maharashtra everyday but most of the accidents involve politicians, who are not provided proper logistic support. “The helipads are usually made overnight. Maharashtra should invest in proper infrastructure as the use of aircraft and choppers is increasing,” he said.

Aviation expert Vipul Saxena observed that the accident appears to be due to variable wind direction and speed, causing loss of reserve of power required for take off & climb. He also pointed to two probable grey areas in VVIP/VIP operations & general helicopter operations -“Firstly, the blue book for VVIP/VIP operations is not being strictly followed as there is no scrutiny/independent check done to ensure there is no lapse. Secondly, even if a helicopter is being operated from a makeshift helipad, the current DGCA rules need to be re-looked while the DGCA (Aerodrom Standards Deptt) must be asked to inspect and give clearance for such temporary helipads, whether they are used for normal operations or VVIP/VIP operations,” Mr Saxena said.