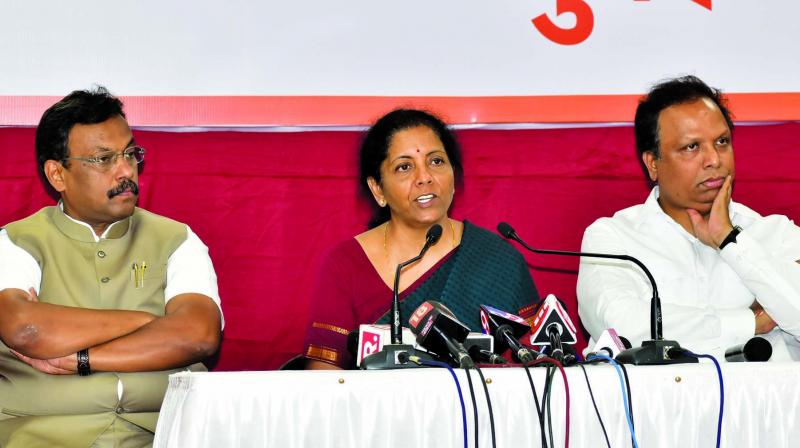 Mumbai: Nirmala Sitharaman, Union Minister for Defence, has refuted the opposition charge that the Bharatiya Janata Party (BJP) is politicising the bravery shown by the armed forces in the Balakot surgical strikes.

“What was wrong in talking about strong political will if the government takes strong steps against terror?” she asked while arguing that the previous Congress led UPA government had failed to take decisive action post 26/11 Mumbai terror attack.

“Had the previous Congress led government taken action after the Mumbai terror attacks the situation in the country would have been different,” said Ms Sitharaman on Thursday.

The Union Minister stated that post the 2016 Uri terror attack and the 2019 Pulwama terror attack, the BJP led NDA took strong actions. The government gave a free hand to the armed forces to take action as it deemed fit.

“While the armed forces are capable of taking decisive action, it is the issue of need for strong political will. The BJP government does not tolerate any such terror attacks and takes strong decisive action,” she added.

When asked about Congress president Rahul Gandhi still raking up the corruption charges in the Rafale deal despite tendering apology before the Supreme Court, Ms Sitharaman remarked that it shows that he has complete disrespect for the democratic institutions in the country.

“In its December verdict the Apex Court had cleared the Rafale deal on the issues of procurement, pricing and process. Even the Comptroller and Auditor General (CAG) too had cleared the deal. Yet the Congress president put words in the mouth of the SC,” she added.

She also attacked the Congress over its poll promise to review the Armed Forces (Special Powers) Act, saying it would be difficult for the Army to operate in a state such as Jammu and Kashmir in its absence.

“For AFSPA to be removed, changes have to be brought on the ground first through program-mes. Till then it cannot be removed,” minister said.