Dr Aparna Bhasker claimed that Selim’s allegations stem from the fact that she does not want to take Eman home. 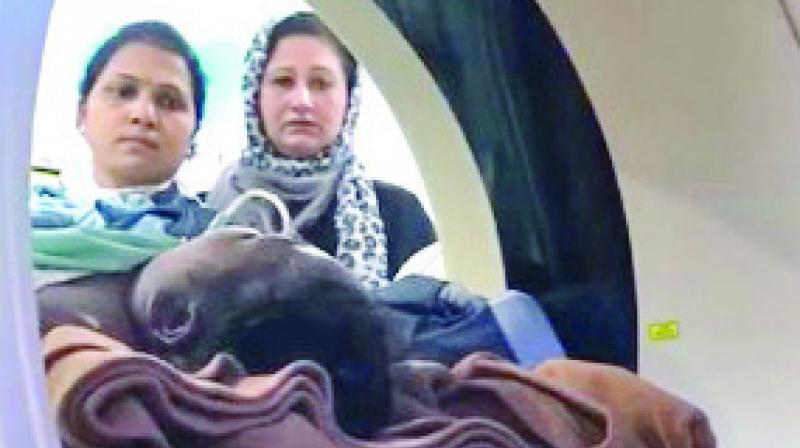 Eman’s sister Shaimaa watches as a nurse slides her inside a CT scan machine at Saifee Hospital on Tuesday. (Photo: File)

New Delhi: Twelve out of the 13 doctors treating the heaviest woman in the world, 36-year-old Eman Ahmed Abl Ed Aty, have withdrawn from her daily treatment.

According to reports, the doctors submitted symbolic resignation letters to the authorities of Saifee Hospital in Mumbai on Tuesday, where Eman is said to have lost over 300 kgs.

The doctors ‘resignations’ came about as a result of the allegations made by Eman’s sister Shaaima Selim, who claimed that the doctors were lying about Eman’s loss of weight.

The doctors are reported to have said that Shaaima Selim’s backlash is 'the worst kind of assault that a patient’s family can do to a doctor'.

“We will not see her on a daily basis and only go when the patient needs us. Whatever has happened is extremely disappointing,” sbariatric surgeon Dr. Aparna Govil Bhasker, who is one of the doctors in Dr. Mufazzal Lakdawala’s team, was quoted as saying.

Bhaskar claimed that Selim’s allegations stem from the fact that she does not want to take Eman home.

“It is very hurtful when she claims that the doctors have not been seeing her," said Bhasker, adding that she visited Eman even on holidays.

Doctors claim that Eman is now down to 171 kilograms. The Egyptian woman was finally put into a CT scan machine on Tuesday, and the scans did not reveal any fresh brain ailment, said the report.

Selim claimed that the doctors wanted her to take Eman back to Egypt, but that her sister was in no condition to fly back. However, the hospital authorities feel that Selim’s backlash began only after Eman was shifted out of the specially-constructed ward into the main hospital building.

On Tuesday, Egyptian consul general Ahmed Khalil also had a meeting with the doctors and Selim, but could not pacify her, said the report.