Another leopard dies on Mumbai-Ahmedabad highway

Wildlife experts have spoken in the past about the need to construct wildlife crossing at important locations. 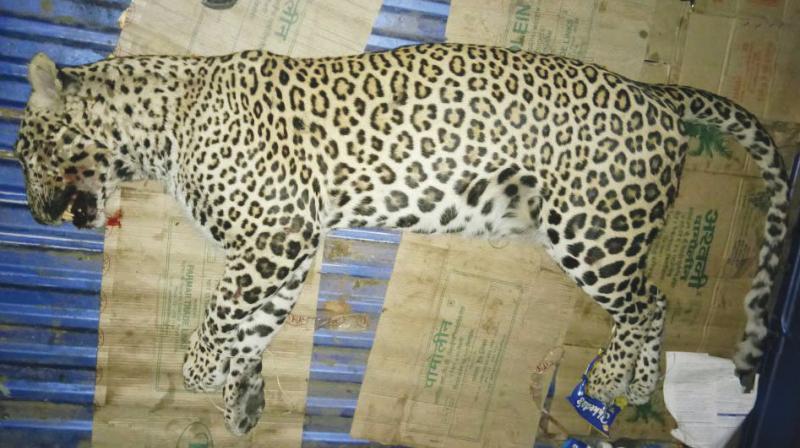 The leopard that was run over on Friday. Its age is around five to six years.

Mumbai: A full-grown male leopard was killed in a road accident on the Mumbai-Ahmedabad highway on Friday night. Though the officials from Sanjay Gandhi National Park (SGNP) rushed to the spot, the leopard was already dead. SGNP officials who conducted the post-mortem of the big cat on Saturday said the leopard had died due to multiple fractures. This is the 41st such incident around SGNP.

The leopard was not tagged by the officials, as it was not radio collared. There are around 35 leopards that have been radio collared by the forest officials. The Ahmedabad-Mumbai stretch has proved fatal for leopards on several other occasions, as the road winds through places frequented by the animal. The leopard was found dead on the south bound stretch of the Ahmedabad-Mumbai highway.

“It appears that the animal was hit by a vehicle while crossing the road near Satyvali and Chinchvati bridge, which is a hilly area. Its age is around five to six years. Though the animal was brought to the park late in night the post-mortem was conducted in the afternoon,” said an SGNP official.

A senior official from SGNP confirmed the incident and said, “We received a call from a local and immediately rushed for the spot. It appeared that the leopard was run over by a speeding vehicle, and was already dead when we reached. We carried the corpse to SGNP in Borivali where a post-mortem was conducted. It revealed that several fractures led to the death of the big cat”.

Wildlife experts have spoken in the past about the need to construct wildlife crossing at important locations. They also believe that boards mentioning animal crossing areas are also a need so that the vehicles can reduce their speed while passing through these locations.

In an official statement, SGNP veterinarian Shailesh Pethe said the post-mortem on the leopard was conducted by Dr Shailesh Pethe and a team of pathologists on Saturday.

“Prima facie cause of death as seen during post mortem examination is ‘hypovolemic shock due to internal hemorrhage caused by mechanical trauma,’” the statement said. The final reports will be available on Tuesday.