The bandobast schedule is likely to continue for few more days as the groups could regroup and create a law and order situation few days later. 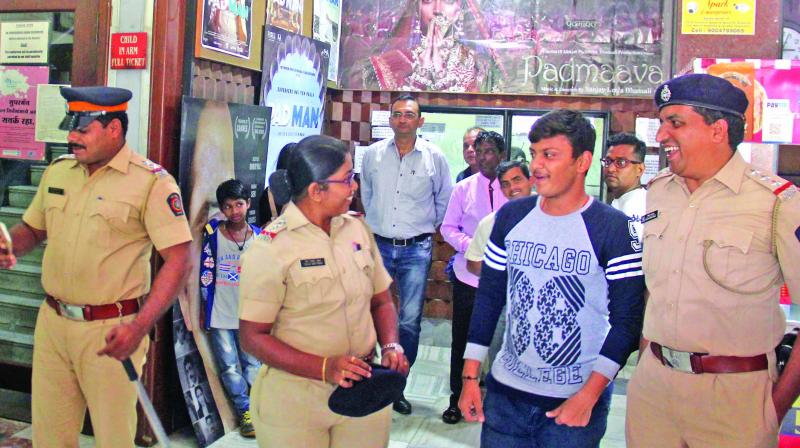 Mumbai: Despite the threats that poured in from the Shri Rajput Karni Sena, many families and groups of friends turned up to watch the controversial movie Padmaavat on Thursday. Around 3,000 Mumbai police personnel were stationed outside 70 city-based multiplexes and single-screen theatres screening the movie to ensure there was no activity that could have disrupted its release on Thursday. No protests were observed across the city till late in the evening even as the police continued its vigil outside the theatres.

The bandobast schedule is likely to continue for few more days as the groups could regroup and create a law and order situation few days later. “The situation has been peaceful till now but we are still putting in place strategies based on possibilities. The decision is yet to be made on how long the police presence will continue at the cinema halls,” said Mumbai police spokesperson and deputy commissioner of police (operations), Deepak Deoraj.

The 100 protesters who were detained on Wednesday, were placed under arrest and remanded to judicial custody by concerned courts. Pointing out that the protests were unlikely to be curbed even after the successful screening on Thursday, the police are likely to oppose their bail on Monday. Mr Deoraj said, “So far, the first day of the film has not seen any violent incident. However, the police has made preventive arrests as a precaution to avoid ruckus on the day of release.”

The action has been taken as per provisions of the Criminal Procedure Code, police said. The police have detained at least 130 persons starting Wednesday. It had prepared the list of potential protestors ahead of the release. The detained Karni Sena protesters and other supporting groups were sent to judicial custody. The police said that they did not seek their custody as the arrests were part of preventive action.

Mr Deoraj added, “The police deployment will be there at all single-screen theatres and multiplexes where the movie will get released. Reserve forces will be deployed at sensitive locations that have residential pockets of likely supporters of Karni Sena.”