Yoga the only way to healthy life, says Venkaiah Naidu

The Vice-President was in Mumbai for the inaugural ceremony of the centennial celebration of Yoga Institute in Mumbai. 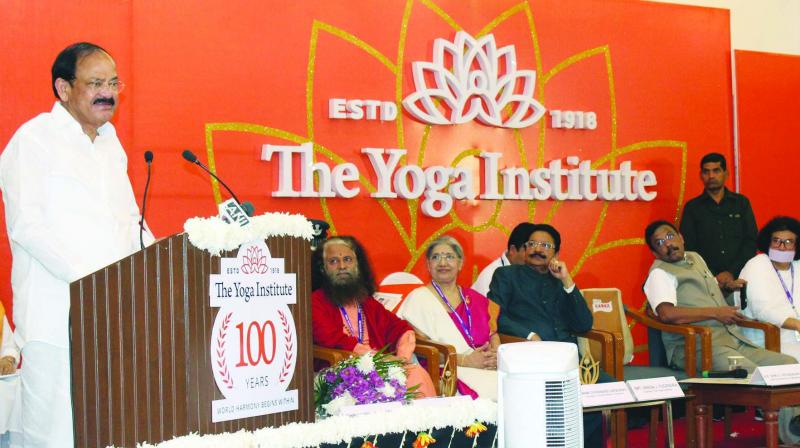 Venkaiah Naidu attended the inaugural ceremony of the centenary celebrations of the Yoga Institute in Mumbai.

Mumbai: Vice-President Venkaiah Naidu on Sunday said that yoga is the only way to a healthy life in modern times and it has nothing to do with any particular religion. The Vice-President was in Mumbai for the inaugural ceremony of the centennial celebration of Yoga Institute in Mumbai which is one of the oldest schools of yoga in the world.

After inaugurating the celebrations at the Yoga Institute, he said that the institute has played a key role in teaching people how to combine work, knowledge and devotion. “Yoga is a holistic approach to well being. It has physical, emotional and spiritual dimensions and has been guiding philosophy for a number of variants in Buddhism and Jainism as well,” Mr Naidu said. Talking about Ashtanga Yoga’s philosophy which is an ability to control random thoughts and achieve inner harmony, he said that these components of the yogic philosophy are from the universal ethical principles like non-violence, truthfulness, non-stealing, fidelity and not being avaricious. Mr Naidu added, “Yoga does not have a narrow religious connotation. ”

Explaining the emergence of ‘physical exercise’, Mr Naidu said it was in the 11th century AD in a branch of yoga called the ‘Hatha Yoga’. “This form of yoga is a system of physical exercise and breathing control,” he said.  He added, “These exercises gained worldwide importance and prominence over the years. We in India felt this treasure house of knowledge should be shared with the entire world.”