The mother and wife of Jadhav were allowed to meet him in the light of “Islamic traditions and based on purely humanitarian grounds,” he added. 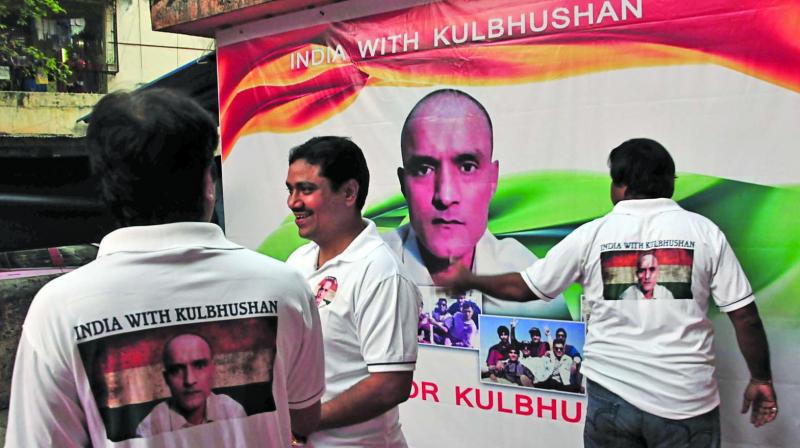 Friends and family of Kulbushan Jadhav organised a bike rally in his support. (Photo: Debasish Dey)

Mumbai: The family of 47-year-old former Navy officer Kulbhushan Jadhav expressed joy over the fact that he will meet his wife and mother in Pakistan on Monday in Islamabad. Mr Jadhav’s brother, Subhash Jadhav told The Asian Age on Sunday, “I am happy that Kulbhushan is meeting his family after a very long time.”

Another relative of Mr Jadhav, on the condition of anonymity, said that the Pakistani government was “finally showing mercy to Jadhav and it is an appreciable move on its part”. Mohammad Faisal, the spokesperson, Ministry of Foreign Affairs, Pakistan, tweeted on Saturday night that “India informs that the mother and wife of Commander Jadhav will arrive by commercial flight on 25 Dec and leave the same day. Indian DHC in Islamabad will be the accompanying diplomat”.

The mother and wife of Jadhav were allowed to meet him in the light of “Islamic traditions and based on purely humanitarian grounds,” he added.

Vijay Kumar Kanojiya, an acquaintance of Kulbhushan Jadhav, said, “This is a great move by the Pakistani government.  Despite Jadhav’s mother being a senior citizen, she too has shown a lot of courage by standing up for her son.”

Mr Kanojiya added, “Jadhav’s wife has also gone through immense pain, and I am very happy that they are finally meeting. I hope the family comes back to the country with a smile on their face.”

A friend of the Jadhavs said, “There is a happy flow of energy in Powai, as people are very hopeful that Jadhav will soon return. It will indeed be a ‘merry’ Christmas for the Jadhavs.”