The Congress leader was taken to Versova police station in the evening where he was detained. 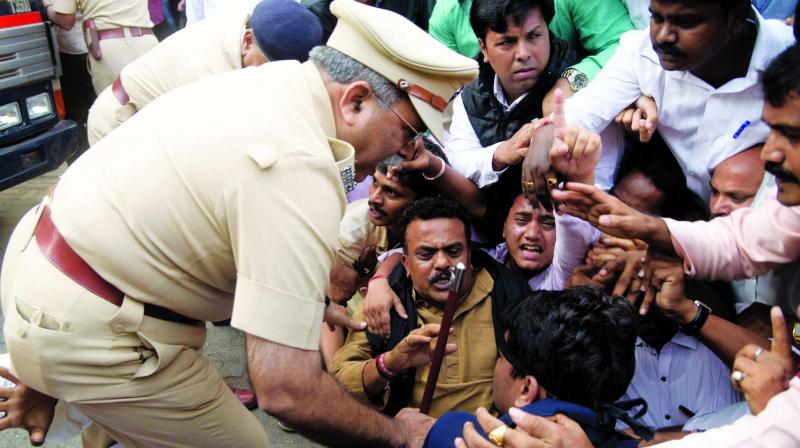 Mumbai Congress president Sanjay Nirupam along with party workers during a protest against demonetisation at Andheri on Saturday. (Photo: Asian Age)

Mumbai: Ahead of the bhoomi pujan of Chhatrapati Shivaji Maharaj memorial at the hands of Prime Minister Narendra Modi, Mumbai Congress chief Sanjay Nirupam was placed under house arrest. Reason being Mr Nirupam, along with his party workers, was planning to hold a silent morcha at Bandra-Kurla Complex (BKC) where the PM was to conduct a public meeting.

Mr Nirupam reacted by tweeting, “Democracy being killed. Policemen in huge numbers outside my house. Why? Because we had planned to protest against @narendramodi today on #Notebandi.” The Congress leader was taken to Versova police station in the evening where he was detained. At around 6.30pm, he tweeted again, “After hours of police detention, I am back. PM @narendramodi has gone back without answering my questions. My questions are as follows.”

The PM was in the city for the inauguration of several infrastructure projects and to lay the foundation stone of Shiv Smarak in the Arabian Sea. “We had deployed policemen across the city especially on the PM’s convoy’s route to maintain law and order as well as to avoid any untoward incident during his visit,” Mumbai Police spokesperson, DCP Ashok Dudhe, told agencies.