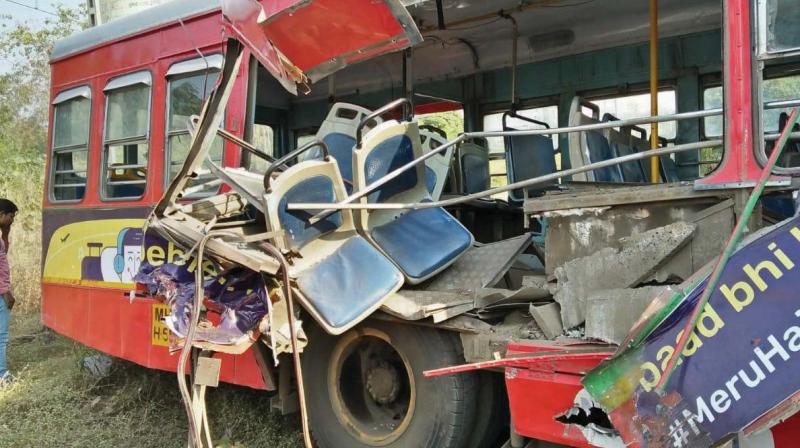 Mumbai: Three persons received minor injuries when a local train dashed into a Navi Mumbai Municipal Transport (NMMT) bus at an unauthorised level crossing between Sanpada and Juinagar on Saturday.

However, the railway services on the harbour line and trans-harbour line remained unaffected. Meanwhile, Central Railway (CR) has ordered an inquiry into the incident and an FIR has been registered at the Nerul police station.

According to CR officials, they had written several letters to the Navi Mumbai Municipal Corporation for constructing a road over bridge at the same place.

CR RPF officials said that the incident took place at around 3 pm. The injured people have been identified as Neelam Tyagi (42), Barasati Vishvash (32) and Sarvesh Thanekar (12). The injured were treated at D.Y. Patil Hospital and later discharged from the hospital.

A senior CR official said that an empty rake was coming out of the car-shed at Sanpada in the afternoon. At the level crossing, when all the vehicles were waiting for the empty rake to cross the railway line, the bus driver tried to cross the tracks.

The chief public relation officer of CR, Sunil Udasi, said “The empty rake and the damaged bus were cleared by 4 pm. The crossing on the railway line between car shed and Juinagar is unauthorised. The road has been built by CIDCO without receiving the Railways approval. The Railways has been insisting NMMC and CIDCO to construct ROB from past many years.”

Rajendra Chavan, senior police inspector of Nerul police station, said, “We have registered an FIR under section 279 and 337 of he Indian Penal Code. The bus driver Rohit Gaikar (38) has been arrested and will be produced in the court on Sunday.”