The tehsil chief of revenue department had sent notices to farmers informing them of the land acquisition process. 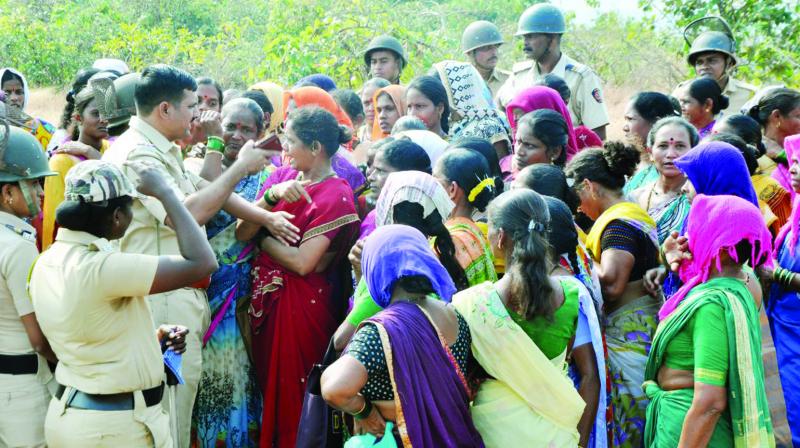 Farmers from 15 villages are opposing the project.

Mumbai: Thousands of farmers and landowners from fifteen villages who are protesting against a proposed oil refinery in Ratnagiri district’s Rajapur tehsil have refused to back down. For the fifth consecutive day, agitators have been preventing government officials from mapping the land needed for the project. TheRs 1 lakh crore oil refinery is slated to be built on the coastline and 15,000 acres of land from 15 villages are required for it.

The tehsil chief of revenue department had sent notices to farmers informing them of the land acquisition process. However, on reaching Nanar village every morning to measure land, officials were prevented from entering the hamlet.  Nanar and 14 surrounding villages have been notified under Maharashtra Industrial Development Corporation Act, 2013. “The Act under which land is to be acq-uired is draconian and stifles the voice of the people. The people were not taken into confidence for the project,” said Satyajit Chavan, convener, Konkan Vinashkari Prakalp Virodhi Samiti, which is leading the protests.

One of the major reasons why the villagers have been opposing the project is pollution. “The government say it is green project. But which oil refinery in the world is green? This shows that government is misinforming people,” said Mr Chavan.

Another issue is the location of the project, which is in close proximity to the 9,900 MW Jaitapur nuclear project. “It is unsafe and illogical to have two big, sensitive projects in a periphery of 20 km. There is no such example in the world. The government is playing with the lives of people,” said Aravind Samant, a protester.

Meanwhile, Ratnagiri guardian minister Ravindra Waikar said he has asked the police not to use force against protesters. “I will talk to the chief minister about the development on the coming Monday,” he said.