The Congress got four seats in Mumbai, the NCP and the SP each won a seat. 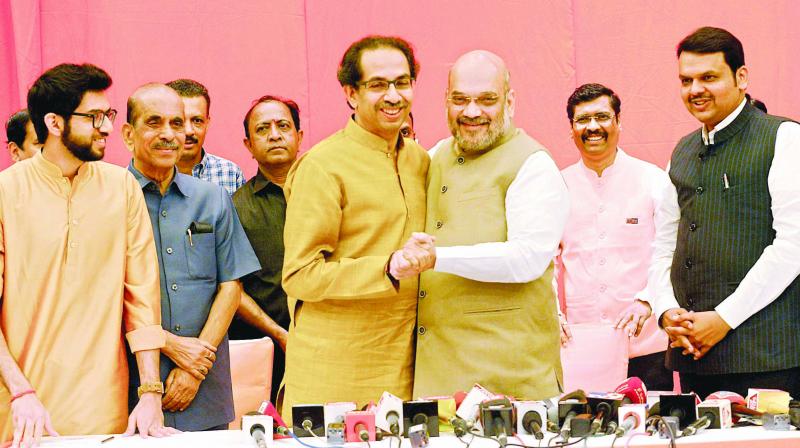 The alliance has perfor-med fairly well in Mumbai with the BJP winning 16 seats and the Sena bagging 14. The Maha Aghadi, Congress-NCP-Samajwadi Party alliance, has won six seats in Mumbai.

The Congress got four seats in Mumbai, the NCP and the SP each won a seat. Shiv Sena leader Aaditya Thackeray, who made history by becoming the first member of his family to take the poll plunge, has marked his arrival in politics.

The 29-year-old next-gen Thackeray won with a thumping majority from Mumbai’s Worli constituency. The party, however, lost its stronghold — Bandra East seat.

The Sena had fielded Mumbai mayor Vishwa-nath Mahadeshwar who lost to Congress’ Zeeshan Siddiqui — son of former minister and Congress leader Baba Siddiqui. Mr Zeeshan is the youngest candidate in the fray.

Out of 18 seats of Thane district, the BJP has managed to bag eight seats, the Sena won five seats, NCP managed two seats, while SP and Maharashtra Navnirman Sena (MNS) and an independent Geeta Jain, a BJP rebel, had won one seat each.

In Palghar district, the BJP-Shiv Sena alliance suffered a big jolt, as the BJP could not win a single seat. The Sena candidate Shrinivas Chintaman Vanga, however, managed to retain Palghar.

Sharma, the Shiv Sena candidate from Nalasopara, lost by 34,000 votes to Bahujan Vikas Aghadi candidate Kshitij Thakur, who retained the seat. Mr Thakur has won by 43,703. NCP candidate Rajesh Raghunath Patil has won from Vikramgad seat, which was a BJP bastion.