Fire breaks out in Sachin Tendulkar’s Bandra flat, no casualties

The fire broke out in flat number 10 on the 10th floor and was doused in an hour. 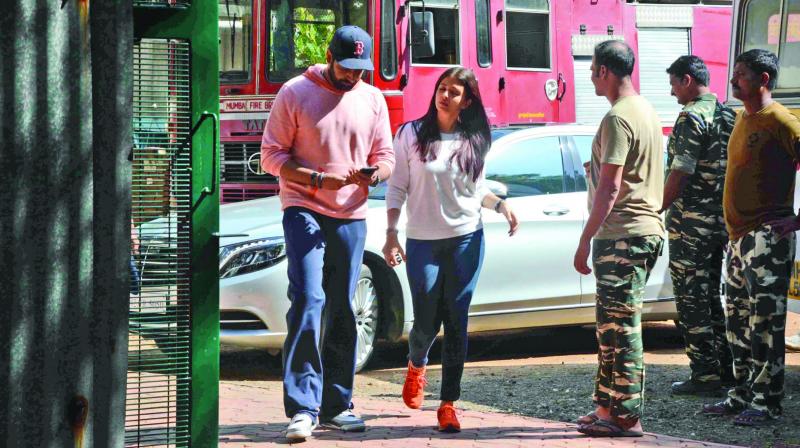 Aishwarya Rai Bachchan and Abhishek rushed to La Mer, Bandra on Tuesday. She owns a flat on the 12th floor in the building. (Photo: Mrugesh Bandiwadekar)

Mumbai: The kitchen of a flat owned by cricket icon Sachin Tendulkar was gutted in a fire that erupted in the La Mer building at Bandra (west) on Tuesday.

While Mr Tendulkar no longer lives in the apartment, his in-laws reside in flat numbers 10 and 11 of the building. The fire broke out in flat number 10 on the 10th floor and was doused in an hour.

There were no injuries or casualties. “The fire call was received around 12.21 pm and it was completely covered by 1.28 pm. The firefighting system in the building was not working and notice will be served to the society under the Maharashtra Fire Prevention and Life Safety Act. We have also given instructions to the  concerned authorities to disconnect electricity and water supply of the building till its firefighting system becomes operational,” said chief fire officer P.S. Rahangdale.

However, Sharad Ughade, BMC assistant municipal commissioner of H west ward, said water supply has not been disconnected so far and further action would be taken in consultation with the fire brigade.

According to fire officials, the fire erupted at about 12.15 pm in duplex flat number 10 of the building, which is home to Mr Tendulkar’s in-laws. The wiring outside the kitchen area caught fire and it was first noticed by their house help. He immediately intimated Mr Tendulkar’s father-in-law Anand Mehta, who was present in the flat. All residents were asked to evacuate the high-rise immediately and they came rushing down. The fire was confined to the electric wiring, two air conditioning units and the kitchen area of flat number 10.

In addition to Mr Tendulkar’s in-laws, the building was also home to actor Aishwarya Rai Bachchan before her marriage to actor Abhishek Bachchan. It is learned that her mother continues to live on the 12th floor of the building. Within an hour of the fire, both Aishwarya and Abhishek reached the building.

Pandit Thackeray, senior police inspector of Bandra police station, told The Asian Age, “Tendulkar’s father-in-law noticed sparks from the meter board and called the wireman, but by the time anything could be done, the fire had engulfed the kitchen. The fire was doused soon. No police case was registered.”