In spite of the tense situation at the MU, no higher official was present at both its campuses. 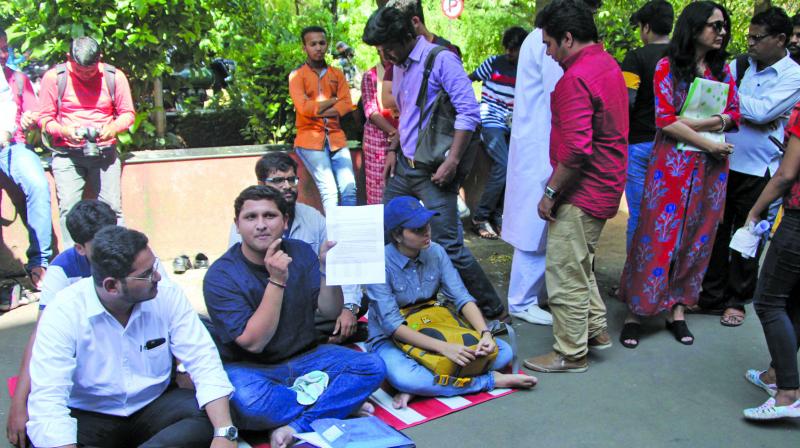 The students have asked that the dates for submission of ATKT forms be extended. (Photo: Mrugesh Bandiwadekar)

Mumbai: Tuesday was the last day for the submission of Allowed to keep terms (ATKT) examination forms across all the University of Mumbai (MU) courses, but over 30,000 students who are still awaiting their re-evaluation results, could not meet the deadline.

Voicing their discontent, around 300 students protested outside MU’s Kalina campus, asking the MU authorities to postpone the dates because if the dates were missed, the students would not be able to appear for the ATKT examinations this winter. This will lead to the loss of an academic year of the students.

The students conducted a ‘gherao movement’ outside the Examination House at the Kalina campus demanding that pending results be declared along with the mark sheets of these students. “It has been more than five months that we are waiting for our results. We are mentally and physically tired of laidback attitude,” said a student.

The students that are waiting for their re-evaluation results to be declared belong to all the streams of undergraduate and postgraduate courses. The reason for the delay in the declaration of the results is the new On-Screen Marking (OSM) system with which answer papers are being assessed. Technical glitches, Diwali vacations and lack of manpower also contributed to the delay. Originally, this year, the varsity had received more than 50,000 applications for re-evaluation, 20,000 results of which were declared by last week.

In spite of the tense situation at the MU, no higher official was present at both its campuses.

When The Asian Age contacted Dinesh F. Kamble, registrar in-charge of MU, he said, “Students will be given five extra days to fill the ATKT forms and we will try our best to declare all the pending re-evaluation results so they can decide whether or not to fill the ATKT form. By tomorrow or day after we will issue an official circular which will state the new deadline which will be October 30.”