Mr Patil said that those who were thinking that the alliance would not be formed were in for disappointment. 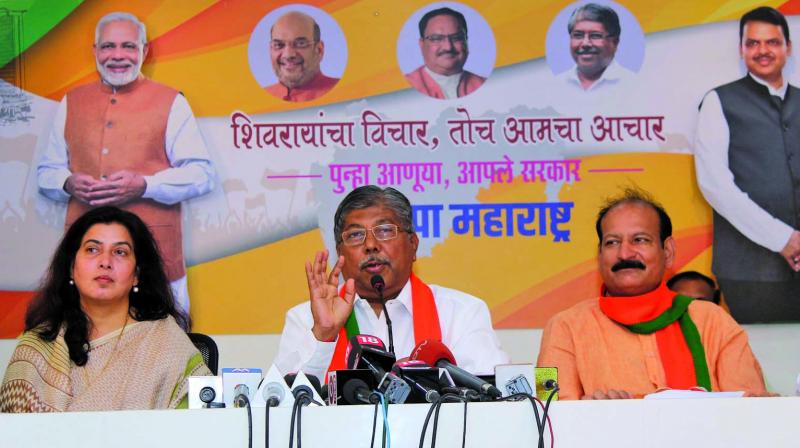 Mumbai: Amid speculation of a breakup of the BJP-Shiv Sena alliance, BJP state president Chandrakant Patil Tuesday said that alliance talks were underway and in their last stage. He also reiterated that the alliance would get 220 out of the 288 Assembly seats in the elections slated to be held on October 21. Mr Patil said that those who were thinking that the alliance would not be formed were in for disappointment.

Addressing a press conference at the BJP headquarters in south Mumbai, Mr Patil said that the final seat-sharing deal between the BJP and Sena for the Assembly polls in the state would be announced by chief minister Devendra Fadnavis and Sena chief Uddhav Thackeray. Both the leaders were discussing the contours of the deal with BJP chief and Union home minister Amit Shah. Mr Patil also said that he would not comment on the seat-sharing issue in future.

Mr Patil’s statement co-mes in the midst of int-ense deliberations going on between the top leaders of the saffron outfits to reach a mutually agreeable seat-sharing formula for the Assembly polls.

Mr Patil said that the BJP will hold a meeting of the 20,000 shakti kendra pramukhs from September 26 to October 10. On Sanjay Raut’s remark that seat-sharing was more difficult than the division of India and Pakistan, the senior BJP leader said that Mr Raut was a writer and hence, used such words.

However, the BJP state president refused to answer questions on the apparent miscommunication between the BJP and Sena which led to cancellation of the previously announced press conference of Mr Fadnavis and Mr Thackeray on the possible alliance on Tuesday.