The penguin baby died on Wednesday over liver ailments. 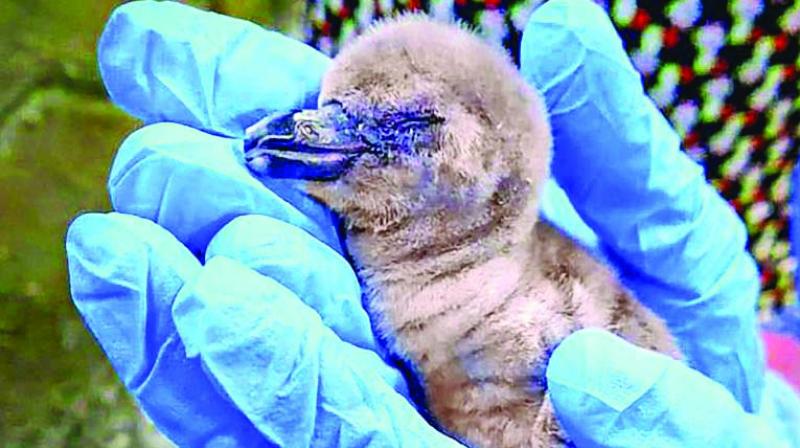 The news has sent shockwaves among Mumbaikars, who expressed profound grief over the tragic death.

Mumbai: Barely a week after Mumbai went delirious over its birth, the city has lost its most celebrated baby. The penguin chick, which hatched on August 15, died on Wednesday night. The news has sent shockwaves among Mumbaikars, who expressed profound grief over the tragic death.

According to civic officials, the preliminary examination during the post-mortem has revealed that there were newborn anomalies like yolk sac retention and liver dysfunction that led to the death of the chick.

This is the second penguin death at the Byculla zoo after eight Humboldt penguins — Flipper, Molt, Olive, Dory, Bubble, Donald, Daisy and Popeye — were brought to Mumbai from South Korea in July 2016. However, 18-month-old Dory had died at the zoo within three months of her arrival due to bacterial infection.

The penguin chick was born to Flipper and Molt, who are the oldest and youngest respectively among the penguins. But, it died suddenly due to internal complications on August 22 during the night. According to zoo officials, the chick was found to be sinking des-
pite good care by its parents. Despite all efforts made by the veterinary doctors, it was found dead in the nest only.

A post-mortem was conducted by the team — consisting of a pathologist, microbiologist and an avian specialist — from Bombay Veterinary College, Parel, on August 23. Dr Sanjay Tripathi, the zoo director, said, “Both parents were taking good care and the chick’s development was proper. There were no signs of any discomfort as it even witnessed an increase in weight. But its condition started deteriorating on August 22 and within 10-12 hours, it died.”

Civic officials said that multiple references on penguins shows that 60 per cent mortality is expected in eggs and chick due to infertility of egg, malpositioning of chick in egg, failure to hatch on its own, chick deformity, inability of parents to feed the chick, yolk sac retention, residual albumin etc.

Further, the Association of Zoos and Aquariums Species Survival Plan and scientific paper 'Artificial incubation and hand rearing of Humboldt penguins' have mentioned a 30-35 per cent mortality rate for chicks less than 30 days of age and also the first three months are crucial for survival of penguin chick.

Questions are being raised over the BMC's delay to announce the news. The penguin chick died on August 22 late night and the announcement was made on Friday evening raising speculation that the civic body was trying to hide the news.

BMC Opposition leader Ravi Raja from Congress said, "The death of a baby penguin has again proved that the zoo authorities are not capable of providing good care to them. In addition to this, there was nearly a delay of almost couple of days to announce the death. Why was the BMC trying to hide the news?"

However, Dr Tripathi said, "We were waiting for the post-mortem result, which came on Friday. Only then we decided to go public with the news. We are hopeful of better results of breeding and chick survival of Humboldt penguins at the zoo in future."