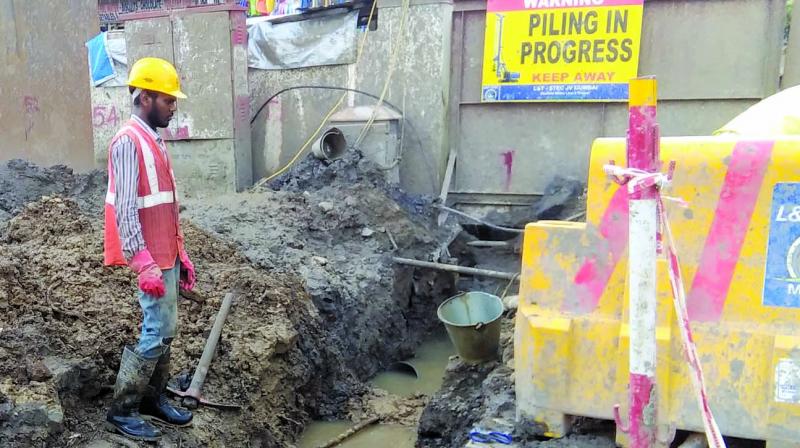 The repair work was in progress when The Asian Age visited the spot on Thursday.

Mumbai: Residents of south Mumbai buildings faced a harrowing time after their water supply was cut off due to the ongoing metro works at J. Tata road. In addition to that, they received contaminated water on Wednesday since two water pipelines had got damaged in the work. An MMRC (Mumbai Metro Rail Corporation) officer at the site said that the piling work (deep excavation carried on to build a strong foundation) has caused the damage.

Metro line three work had hit the water supply for these SoBo residents. “On Wednesday, at around 6 pm, the tap water we received was black in colour. Post which, our water supply was cut and we are relying on packaged water bottles and BMC tankers for water,” said Ketan Mehta, a resident.

The damage caused due to the work was rectified by the BMC officials late in the night. L&T is the concerned company appointed on contract by MMRC for the required work in the area. “Their piling work had damaged the pipeline and a BMC staffer from the ‘A’ ward was immediately sent to repair it. We have asked the MMRC to take due precautions before working near the BMC pipelines,” said a senior civic official from the water department.

Meanwhile, the other residents alleged that the water is not only contaminated with mud but also with chemicals, that must have been used for the piling work. “Although they have emptied the water tank, we fear that the chemicals might have entered the water and spread all over the tank and pipelines. There is no gurantee that the water we will receive in future won’t be contaminated,” said a resident who did not wish to be named.

In a formal statement released by the MMRC, it stated that, “During the piling work at the Churchgate metro station location, an undergroung sewer drain started leaking due to a puncture. Unfortunately, at the same location, BMC’s water pipeline, even though unaffected by the metro work, had leakages in its joint, because of which the water supply of the two neighbouring buildings was contaminated for some time. But the sewer line was immediately blocked by the metro contractor to stop water contamination. The repair work was completed by Thursday night and the water supply was restored.”

Earlier this year, the metro authorities punctured a gas pipeline, in the
same area, while surveying the J.Tata stretch. As soon as the pipeline was punctured, the entire area was engulfed with the smell of the gas, creating panic amongst residents. This week, the metro construction had affected the electricity supply of the area at J. Tata stretch.

The infrastructure company is expected to take permissions for various utilities the city houses like storm water drains, gas pipelines and sewerage lines. In total, the city has 25 utilities, which pertains to various bodies like BMC, BEST and Mahanagar Gas Limited. Thus, the contractor has to apply and seek permissions from the required bodies before carrying out any excavation work on the road which bears any such utility. Also, a nod from the traffic department has to be sought. The contractor or infrastructure company should manually examine the site and figure out the utilities, post which diversions should be done if required. The BMC itself has 12 to15 utilities. According to an official, if the contractor damages any utility, then the cost of repairing it should be borne solely by them.