The weather observatory in Santacruz recorded 58mm rainfall in the same period. 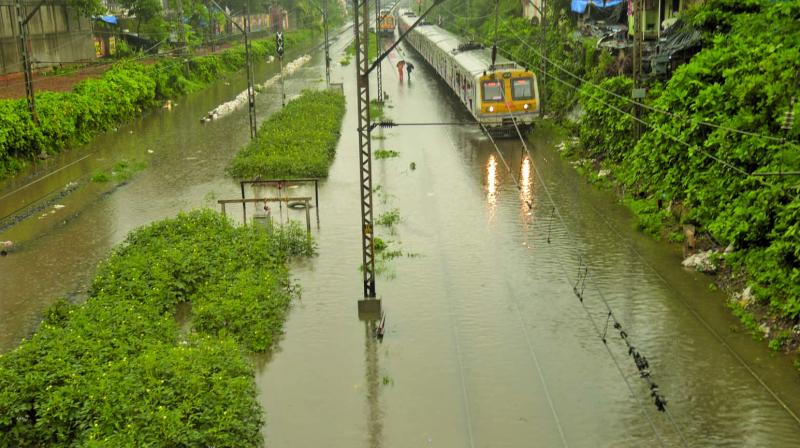 Mumbai: After a dry spell of nearly a week, heavy rains lashed Mumbai and neighbouring districts on late Tuesday night and Wednesday bringing relief from rising heat while also causing floods in few areas. Local train services   in  the Central line experienced delay due to waterlogging on Wednesday morning.

Amid heavy downpour and poor visibility, three cars collided with each other injuring eight people in Andheri on Wednesday. Two were later rushed to a private hospital.

Heavy to extremely heavy rainfall is likely at many places in neighbouring Raigad district and Ratnagiri in the Konkan region on Wednesday and Thursday, an IMD official said.

Nearly 171mm rainfall was recorded at Colaba between 8.30 am on Tuesday and 5.30 am on Wednesday. The weather observatory in Santacruz recorded 58mm rainfall in the same period.

Some buses of the Brihanmumbai Electric Supply and Transport (BEST) were diverted due to waterlogging on a few routes in the city, BMC said. Trains on the Central line were running late due to flooding in low-lying areas.

“There was a delay of 10 to 15 minutes on the main line between Kurla and Sion due to waterlogging in some low-lying spots on this patch,”Central Railway's chief spokesperson Sunil Udasi said. The local trains on the Western Line were, however, running as per schedule.

“Heavy rains have ensured sufficient water storage in six of our reservoirs, which is good news for everyone," the civic official said. Another IMD official said a system of clouds was moving towards Mumbai from the Arabian Sea on the west coast.

“The low-pressure area that is developing will bring more showers to the Mumbai region in next 48 hours,” he said.

“We are closely observing the cloud conditions. Security forces as well as the National Disaster Response Force (NDRF) and disaster management cells of the respective districts have been informed about it,” he added.