The Mumbai traffic police will also have heavy presence at various checkpoints. 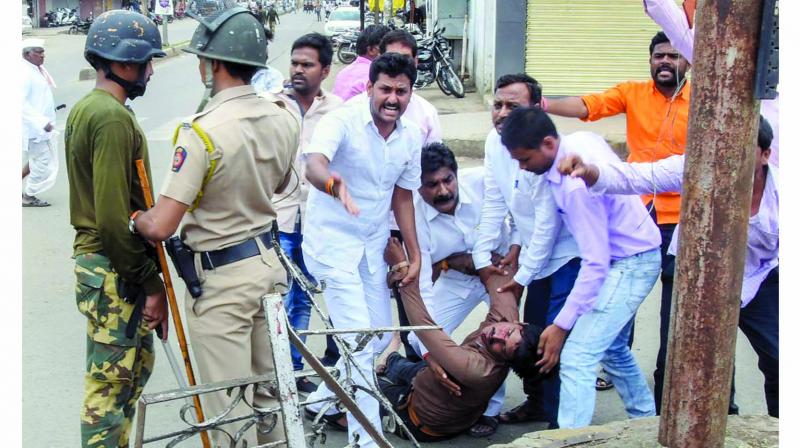 A protester is carried away after being injured during a protest rally in Nanded. (Photo: PTI)

MUMBAI: In light of the call given for a Mumbai bandh on Wednesday by the Maratha Kranti Morcha (MKM), the Mumbai police has appealed protesters to maintain peace while raising their demands, and not create any law and order situation in the city. As a preventive measure, 2,500 policemen will be deployed in the city at various points such as Azad Maidan and near Mantralaya to avoid any untoward incident during the citywide bandh.

Mumbai police spokesperson and deputy commissioner of police (operations) Deepak Deoraj said, “We have ensured all safety measures. Besides this, the vigilance team has been instructed to keep a close watch on activities, especially in sensitive areas of Mumbai on Wednesday.”

A senior official who did not wish to be named said, “There will be heavy deployment and large numbers of police will be present in and around Azad Maidan and Mantralaya area to restrict any wrongdoing on Wednesday. The area will be barricaded, and there will also be heavy bandobast deployed outside Chhatrapati Shivaji Maharaj Terminus (CSMT) station since many supporters of the Mumbai bandh are expected to reach the city via railway.”

The Mumbai traffic police will also have heavy presence at various checkpoints. Police sources said that the police will patrol and put up nakabandis in the city from Tuesday night, random checks of vehicles will be conducted, and precautionary measures will be taken to avoid any kind of untoward incident during the agitation.