Although the work was supposed to be completed by mid 2017, only foundation pillar have been constructed till now. 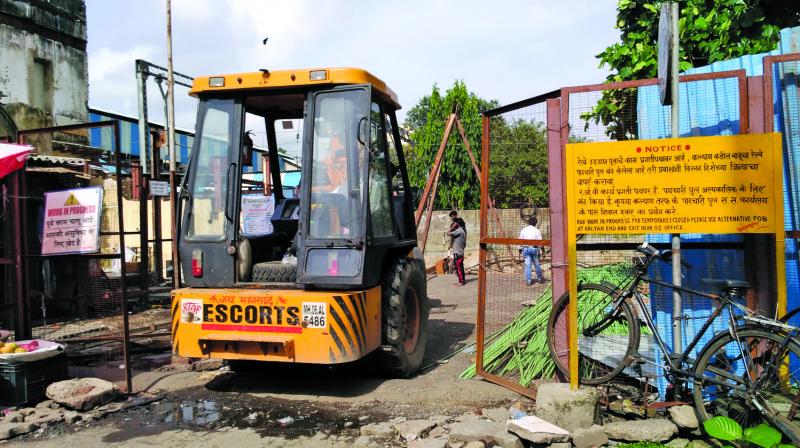 The construction work has started for the Vikhroli ROB.

Mumbai: The construction of a Rail Over Bridge (ROB) in order to provide connectivity between the east and west sides of Vikhroli is going nowhere despite the approximate time of completion of the project to be mid-2017. As per the plan, the construction was supposed to be partly executed by the Central Railways and the Brihanmumbai Municipal Corporation, but has come to a standstill as the latter is yet to begin their part of the work. As a result of this delay, the commuters are forced to ply on longer routes that cut into a huge chunk of their time.

When The Asian Age contacted the BMC department responsible for bridges, the official attached to the department said that the construction of the ROB is caught in a legal battle at Supreme Court and denied to give any further detail about the project. According to the reports, the land for the ROB was acquired from Godrej Pvt. Ltd. for the project but the company had claimed its land back in 2015 by approaching the Supreme Court for the same. Meanwhile, the area’s MLA, Kirit Somaiya said, “The BMC will begin the work post monsoon and tenders for the same have been finalised.”

The decision to construct the said ROB was taken in 2015. It was to replace the level crossing at the spot that was shut in 2011, owing to the rising death toll on the tracks. The cost estimate of the construction of the bridge was estimated to be Rs 5.78 crore, according to the construction department of the CR. The ROB is expected to start from Pirojshah Godrej road and extend towards the Eastern Express Highway.

Although the work was supposed to be completed by mid 2017, only foundation pillar have been constructed till now. “In the absence of the ROB, we are forced to detour and ply from either Ghatkopar or Kanjurmarg, it consumes more time as the Gandhinagar route of Kanjurmarg is always riddled with traffic,” said Mario Rodrigues, a Vikhroli resident and chairperson of Bombay Catholic Sabha.