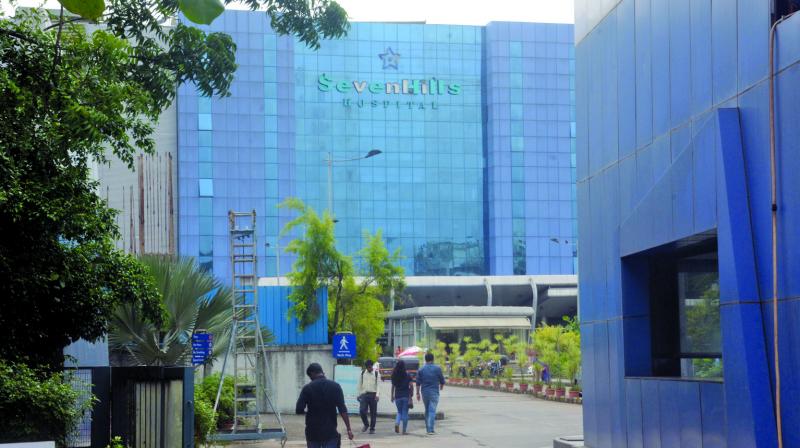 Mumbai: Rammurat Jaiswal, a 57-year-old patient admitted in Andheri’s Seven Hills Hospital, jumped off the eighth floor when he was taking a stroll in the corridor. Jaiswal, who was admitted for a bypass surgery on July 14 under the Mahatma Jyotiba Phule Jan Arogya Yojana medical scheme, was shifted to the normal ward on Friday. He was unconscious in the ICU for two days following the operation on July 19. The hospital said that Jaiswal was acting in an ‘erratic’ manner post the operation. However, the kin of Jaiswal have claimed that there was a medical negligence on the hospital’s part, and he was mentally stable before the surgery.

The MIDC police has registered an Accidental Death Report (ADR) and is probing the case. According to the police sources, the incident took place at around 10.15 am on Monday morning when the patient was taking a stroll with his son Pravesh (16) and a medical attendant. When the trio was walking, Jaiswal made up an excuse and went near the balcony of the eighth floor, which had a glass railing and jumped off it. The son and the medical attendant were shocked and immediately rushed to the ground floor, and found Jaiswal lying in a pool of blood. He suffered serious head injury due to the fall.

Navinchandra Reddy, DCP Zone 10 told The Asian Age, “We have registered an ADR and prima facie it looks like a suicide. We will take appropriate action if negligence is found on the part of either side, which can be revealed only after the post-mortem.”

The Seven Hills Hospital’s PR team’s representative Bhavesh Phopharia said, “On Monday, the patient took tea in the morning, dressed himself up to go for post operation exercise. As per instructions, the patient was taking a walk in the corridor for a speedy recovery. But he jumped before anyone could react. The emergency team attended him and immediately was brought to ICU, but unfortunately, he couldn’t be revived and was declared dead at 10.40 am.”

However, speaking to The Asian Age, Jaiswal’s son Vinod (22), who is an auto rickshaw driver said, “My father was mentally stable before coming to this hospital, and started acting weird after the surgery. There must have been negligence on the hospital’s part during the surgery.”