Search operations are still on to extricate the people feared trapped under the concrete rubble. 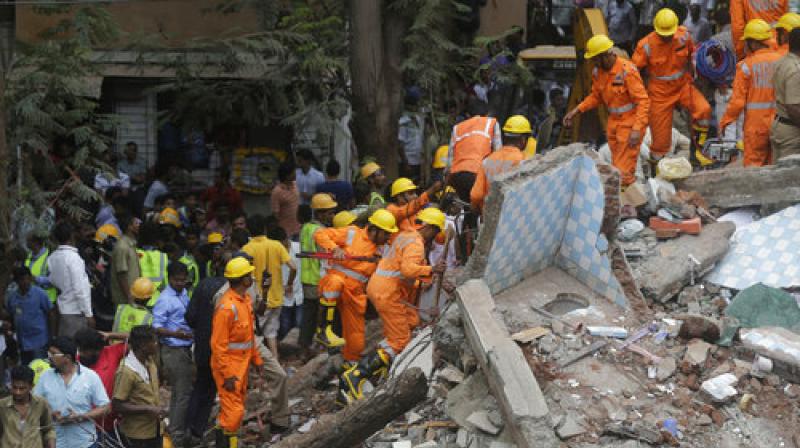 Rescuers work on the debris after a five-story building collapsed in the Ghatkopar area of Mumbai. (Photo: AP)

Mumbai: Eight people, including six women, were killed and several others were injured after a three-storey residential building collapsed in suburban Ghatkopar in Mumbai on Tuesday, civic officials said.

At least 8 people were also injured in the mishap, a senior police official said. Search operations are still on to extricate the people feared trapped under the concrete rubble.

Eyewitnesses said four persons were taken out from the rubble of the building that caved-in, and rushed to hospital. The structure that came down this morning at the Ghatkopar's Damodar Park area housed around 15 families.

Most of those trapped in the debris are believed to be elderly and women. The civic body's control room received a call at around 10.43 am about the accident, a BMC official said.

Fire engines, a rescue van and ambulances were rushed to the spot immediately, he said.

According to the fire brigade officials engaged in the rescue operation, nearly 15 people have been pulled out of the debris so far and referred to nearby hospitals.

Eyewitnesses said in the morning they heard a loud sound, similar to that of lightning since it is monsoon season.

"Then I came out of my building and found lot of dust, cries and noise of people seeking help. I saw parts of the building collapsing," an eyewitness living in the neighbourhood said.

According to a local resident, it was a 35-year-old building. The city and its suburbs had received heavy rains over the last several days, though there had been some respite since Monday with showers becoming intermittent.

The Mumbai Police cordoned off the area while traffic was blocked on the Lal Bhadur Shastri road to provide a 'green corridor' to rush the rescued to hospital.

A resident of the collapsed building, whose mother and two other family members are feared trapped in the debris, lamented that the chances of their survival are slim.

Rajesh Diyora, a resident of the same building, said some commercial activity was being carried out on the ground floor and that might be the reason for the collapse of the building. He said he was saved as he had left for his office before the building collapsed.

The building was not listed in the dangerous category, as per locals.