The traffic police officer took Mr Nair’s driving licence and asked him to collect it from the police station. 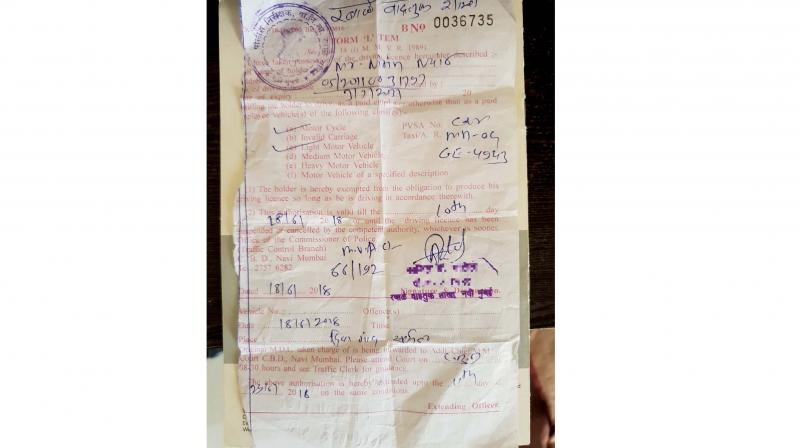 The challan issued to Nitin Nair.

Mumbai: A Mumbai-based software engineer, Nitin Nair, recently learned that no good deed goes unpunished. Mr Nair, on June 18, offered a lift in his car to three stranded passengers, including a senior citizen, who had been waiting for public transport in the pouring rain at Airoli Circle, Navi Mumbai.

Mr Nair was asked to halt by a traffic constable who gave him a challan of Rs 2,000 under section 66/192 of the Motor Vehicles Act (MVA), which prohibits the use of private vehicles as transport vehicles for passengers or goods.

The traffic police officer took Mr Nair’s driving licence and asked him to collect it from the police station. The Good Samaritan then learnt that he was fined Rs 2,000 for offering a lift to strangers under the MVA. On Friday, Mr Nair shared a post on a social networking website highlighting his ordeal.

Speaking about his experience, Mr Nair had posted, “When I went to the police station to get my license, I was informed that I need to go to court to get the license back as I have been charged under section 66/192, which states that it is illegal to give a lift to an unknown person in a private vehicle without permit or contravention permit to ply passengers (sic).” Mr Nair added in his post, “I’m not writing to debate what is right or wrong but to make you guys aware that our country doesn’t want us to help our fellow countrymen.” The Asian Age contacted Mr Nair but got no response at the time of going to press.

When contacted, a senior traffic police official said, “There is a provision in the section 66/192 of the Motor Vehicle Act that clandestine ferrying of passengers in a private vehicle is not allowed. To put it in simple words, a private vehicle cannot operate as passenger vehicle without a permit. For example, if a luxury bus does not have a permit, it cannot ferry passengers from point A to point B, and charge them for it.” He said, “However, if the lift is given without any monetary transaction, it does not result in a fine, as per the law.”

Nitin Pawar, deputy commissioner of police (traffic) of Navi Mumbai police said, “I have asked for a report from the traffic unit concerned. I am waiting for the report. I have asked my men to verify the facts and intention before taking any action under section 66/192 of MV Act or as per the law.”