The residents alleged that the construction activities related to the underground Metro-3 project could have led to the collapse. 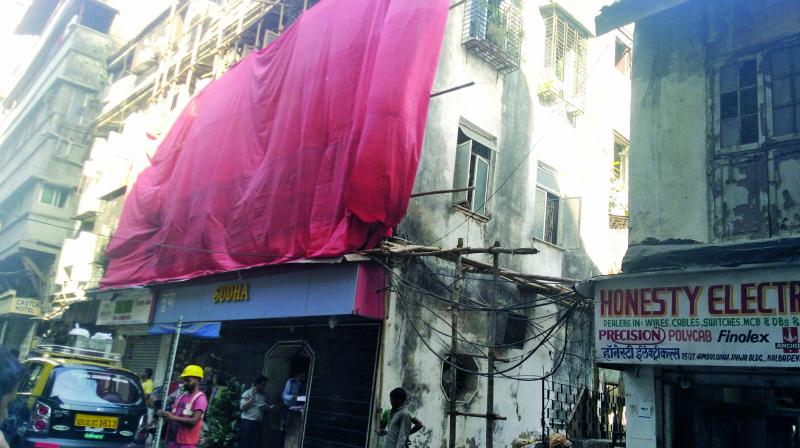 Mumbai: A 65-year-old music school, popularly known as Wadia Musical Classes, which was run by India’s first female tabla player, the late Dr Aban Mistry, shut down after a slab from Jer Mahal, the three-storey residential structure, also a cessed Maharashtra Housing And Area Development Authority (Mhada) building, collapsed in Dhobi Talao on Saturday morning. The residents alleged that the construction activities related to the underground Metro-3 project could have led to the collapse, while a few also claimed that Mhada did not conduct repairs on time.

Commenting on the residents’ allegations, a Mumbai Metro Rail Corporation (MMRC) source said, “The collapse did not occur due to tunnelling because the operations were stopped on April 19.” When The Asian Age visited the site, it was discovered that a notice had been put by Mhada on April 21, the day of collapse, warning residents about the structure’s weak condition.

The 400-sq-ft office of Swar Sadhna Samiti, an organisation founded by Mistry and her guru, late Jijina in 1953, was located on the first floor of the Jer annexe building. The tunnelling process of Mumbai Metro-3 (Colaba-Bandra-SEEPZ) was 120 metres away from the site of collapse. However, residents claim vibrations were felt before collapse. A slab had collapsed from the third floor of the building in the wee hours of Saturday last week, which led to the housing authority taking steps to evacuate the residents from the structure.

“The apartment housed several old musical instruments like tanpuras, harmoniums and tablas which were used by Mistry. Students were taught western classical music here, but from past few years, the centre was organising events to promote Indian classical events. Also next month, we had 676 music events lined up,” said Yamini Zaveri, a member of the Samiti. She added, “Now we don’t know where to shift all these instruments as we do not have any alternate option. All the instruments, old research papers and books of Mistry have been packed to be relocated.”  Mistry who passed away in 2012, was the first professional female tabla player of the country, and was honoured by the president recently.