The accused, Ejaaz Anish Ahmed Ansari (19) had allegedly climbed the roof of a shanty with the intent of theft. 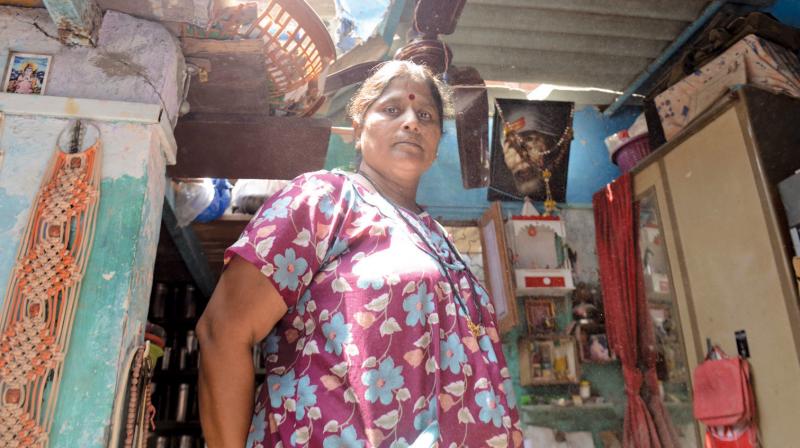 A resident stands underneath the damaged roof of her house in Wadala. (Photo: Rajesh Jadhav)

Mumbai: An alleged thief’s attempt to steal a few valuables from a residence at Ganesh Nagar, Wadala (E) caused a major fire that led to the gutting of 20 shanties in the area.

The accused, Ejaaz Anish Ahmed Ansari (19) had allegedly climbed the roof of a shanty with the intent of theft, but he lost his balance and tugged at a high-tension wire to regain balance. When he pulled the wire, it set ablaze 20 houses in the slum.

The accused sustained 70 per cent burns, while a family of three and their tenant who lived on the mezzanine floor sustained severe burn injuries. They were immediately rushed to the civic-run KEM Hospital along with Ansari. A few other residents sustained minor burn injuries due to the short circuit. The injured told the police and The Asian Age that the accused was a thief, but the police are still verifying if the accused was there to steal or meet an acquaintance as per his version.

Archana Madiye, a local resident said that she was about to sleep at 1.15 am when the roof fell on me and my family. “I sustained an injury on my foot, while a brick from the wall hit my head,” she said. Another resident, Sunil Shankar Thale (42)  said , “We heard a thief on the roof , and within seconds, refrigerator and the television caught fire. My wife has sustained injuries while my daughter is recovering as informed by the doctors.”

When contacted, senior police inspector of Wadala police station, Parshuram Karyakarte said, “We have registered a case against Ansari for negligent conduct with respect to fire and combustible matter under section 285 of the Indian Penal Code. We have recorded statements of the victims, and will soon record Ansari’s statement too, following which we will make the arrests”.

The police said five people were injured in the mishap.