In another such incident, four people had died, including students, after a truck collided into a bus in Maharashtra's Gadchiroli district. 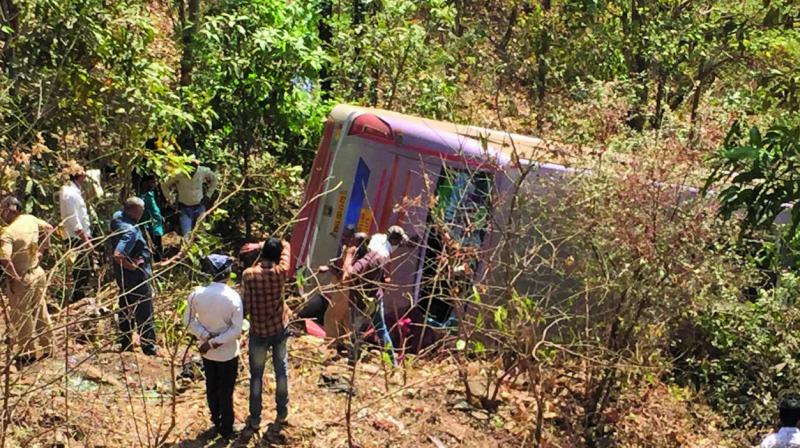 On March 6, seven people died and seven others were injured in a collision involving a van and a state-run bus in Nalagonda district in Telangana.

Mumbai: At least six people died and 45 were injured after a bus veered off the road and skid into thorny bushes on a slope in Maharashtra's Palghar district on Sunday.

According to reports, the injured are being treated at state-run Trimbakeshwar Primary Health Centre and Nashik Civil Hospital and the deceased have been admitted to Mokhada Hospital.

Thane Region Disaster Management Cell (RDMC) chief Santosh Kadam said that the accident took place around 2.45 pm after the bus fell into a gorge at Torangane ghat between Mokhada and Trimbakeshwar villages.

Some of the injured are said to be critical. Mr Kadam said, “The private bus had started from Nashik in north Maharashtra and was headed towards Palghar, around 100 km from Thane. All of them were from Gujarat. No one knows why the bus driver lost control yet.”

S.P. Gaurav Singh said, “All injured victims have been shifted to Nashik Civil Hospital. The tourist bus was going from Shirdi shrine in Maharashtra to Mahalakshmi temple in Palghar.”

Dr S.P. Jagdale, medical superintendent of Nashik Hospital, said, "Nineteen patients were brought here. Out of those, three have been moved to a private hospital. Three patients have suffered multiple fractures, two have head injuries and others are recuperating." He further said, “Our team members are taking good care of the injured and two orthopaedic surgeons are operating on the patients. We have also set up an information desk to tackle the problems of the patient's kin.”