The leaders from other ally parties like Ramdas Athawale, Mahadev Jankar and Sadabhau Khot were also present to show solidarity. 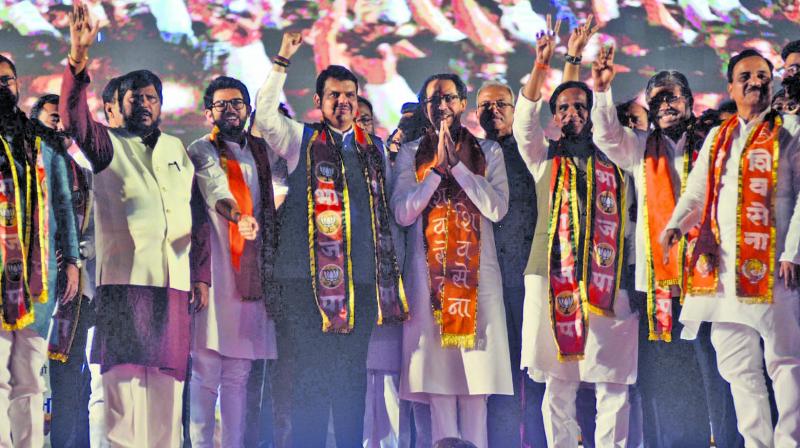 Mumbai: In the first campaign rally of the Bharatiya Janata Party (BJP)-led NDA for the Lok Sabha elections at Kolhapur on Saturday, chief minister Devendra Fadnavis took potshots at the Opposition’s grand alliance, saying that the nation doesn’t need an alliance of 56 parties, but a 56-inch chest to solve the issues.

“We have already concluded our seat-sharing talks, but what is the Opposition doing? It is claiming to have formed an alliance of 56 parties. Are these parties even registered? You don’t need an alliance of 56 parties, but a 56-inch chest to run the country,” he said while addressing the first joint rally. With this rally, the alliance kick-started the campaign for the Lok Sabha polls.

The leaders from other ally parties like Ramdas Athawale, Mahadev Jankar and Sadabhau Khot were also present to show solidarity.

In his speech, Mr Fadnavis said that the Opposition have already given up before fighting the polls. “The captain (Sharad Pawar) has already withdrawn from the Madha constituency. They are unable to find candidates for the polls. Some have returned their tickets while some have changed their tickets. Its a foregone conclusion that the NDA will form the government again at the Centre,” he said.

He further added, “Based on the works we have done for the poor and downtrodden , I am throwing an open challenge to the Opposition parties to compare work undertaken by it in the past 15 years and ours in the last five years. Even in Western Maharashtra, the state government has provided funds to complete irrigation projects.”

The chief minister also took a jibe at the Nationalist Congress Party (NCP), saying, “You need to have nationalism in your heart.” “We are an alliance of nationalistic and Hindutva ideologues. But our Hindutva is not narrow. It goes beyond caste, language and religion,” he said.

“He has been disrobed in the Lok Sabha, Vidhan Sabha and municipal elections. So he should stop talking on behalf of others by accepting supari (contract killing),” he said.

Shiv Sena chief Uddhav Thackeray said that the Congress-NCP leaders ruined the state and hence it was the people’s wish that the BJP and Sena should come together. “We do not want power for the sake of it, but to serve poor people,” he said.