Mumbai: Elephant hurt, but bureaucrats deny caretaker is to blame

The use of ankush on animals is banned by the court. 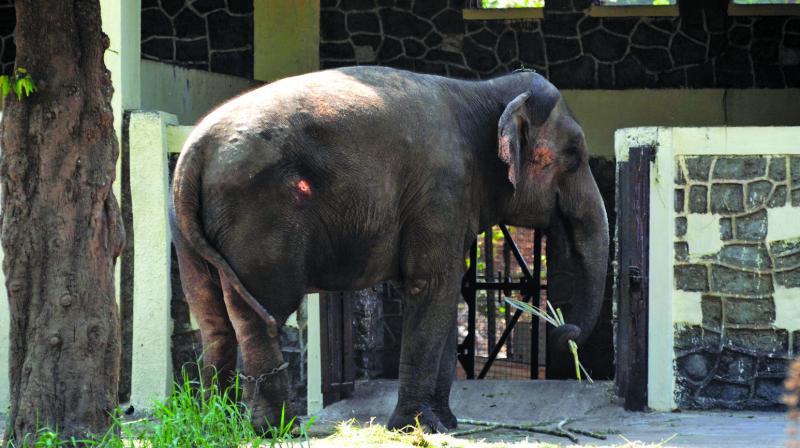 Anarkali sustained injuries on her head and tail.

Mumbai: A 54-year-old female elephant named Anarkali, housed at Byculla’s Veermata Jijabai Bhosale Udyan, allegedly sustained injuries on her head and tail after her caretaker used a hooked whip (ankush) to control her. The use of ankush on animals is banned by the court. However the zoo authorities rebutted the allegation saying that the elephant sustained the injuries while sleeping.

However, the ankush, the sharp-edged weapon made of iron is used on sensitive parts of elephants to compel them to obey to the commands of elephant trainer (mahout). Its semi-circle hook-like portion, which can cause serious harm, is usually applied on the elephants. Jamal Khan, one of the mahouts looking after elephants at the zoo, said, “To control an elephant you need the ankush. They (elephants) obey you when they’re shown the ankush, otherwise it is very hard to manage. A few days ago she was injured by the mahout on her head and her legs and she was bleeding. She is being treated now. Mahouts use weapons that cause injury and this is not the first time it’s happening.”

Dr Sanjay Tripathi, director, Byculla zoo said, “The injury she has is caused while sleeping and not by the mahout. We take care of the elephants like our own baby.”