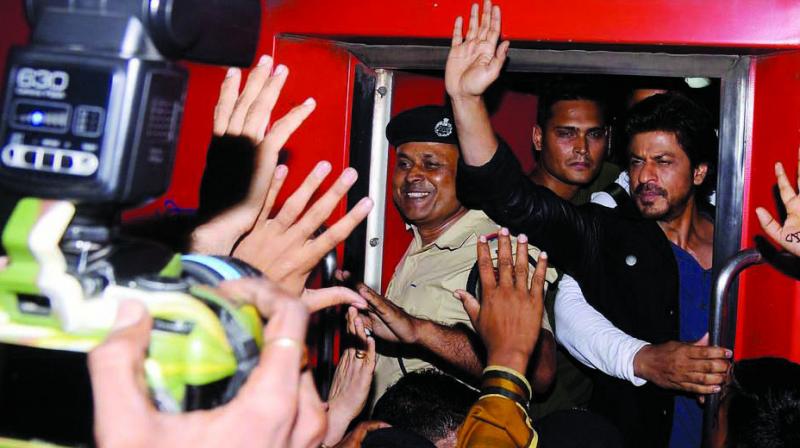 Ms Singh has stated in her letter that the actor illegally promoted his movie using the railways. Her letter reads: “At every station a crowd was organised by his PR machinery and this snowballed into large crowds assembling on the railway platform which then became a venue for Shah Rukh Khan to promote his film (Raees)”.

Ms Singh has alleged that a “person lost his life” in the commotion, while SRK promoted his movie by using the train and railway platform. “As a responsible citizen, Shah Rukh Khan should know the consequences of his actions. When a hapless passenger comes to board the train they should not be subjected to these troubles. Such PR exercises at the cost of a life are unacceptable,” said Ms Singh.

Taking note of her letter, Mr Prabhu tweeted saying that action would be taken at the earliest. His tweet said: “Directed DG RPF to investigate the matter and take stern action against any lapse”. Despite repeated calls and SMS, Mr Khan’s public relations team did not respond at time of going to the press. Mr Khan on Tuesday expressed “sadness and pain” after Pathan’s untimely death. Pathan is said to be a local politician.

He reportedly died of a heart attack after being caught in the crowd of fans gathered at the Vadodara station. The railway policemen allegedly used batons to control the crowds, which led to a stampede. The lawyer-cum activist said that Mr Khan is liable for criminal action under Indian Penal Code (IPC) 336, Railway Act 145, 175 and 17 (9). According to the law, any action that causes nuisance to people in a public space is unacceptable.

Ms Singh said that it is easy for the actor to express his grief. “But the fact remains that a person is dead and he violated the law of the land,” she said. Ms Singh has also lambasted the Railways for its lackadaisical attitude. “The railway officers have acted in a manner which has prejudiced the safety and convenience of these passengers, therefore, an inquiry should be ordered and departmental action needs to be taken against the delinquent officers,” she has stated in her letter.

On the wrong track