While the investigation is in process, eight people have been taken into custody. 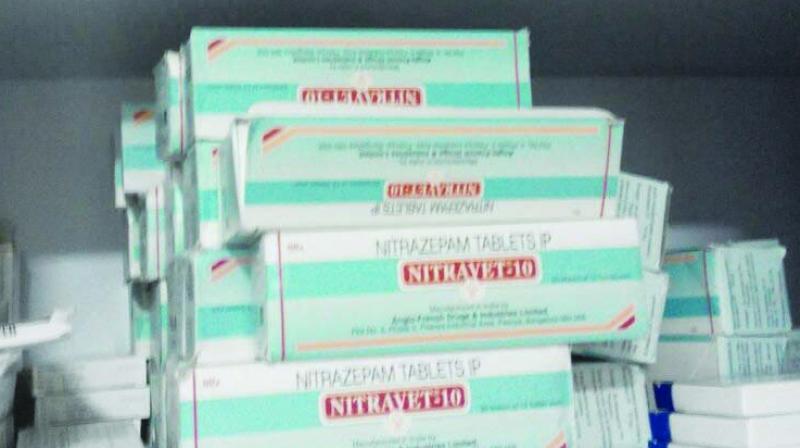 A portion of the seized consignment.

Mumbai: Officials of the Directorate of Revenue Intelligence (DRI) on Tuesday seized 15 lakh tablets of psychotropic substances worth Rs 57 lakh and took eight persons into custody in this connection. The drugs were procured in India from various dealers across the hinterland and supplied through post.

The orders for these banned drugs were placed online or over phone calls from the US/UK.

Officials seized the drug following specific information that these psychotropic substances (like Alprazolam, Zolpidem etc.) were being exported directly by a group based at Mira Road. Searches were conducted in the premises of Air Express, a private company, and two other premises resulting in the seizure of 15 lakh tablets valued at around Rs 57 lakh. The group’s modus operandi was that the orders were received from US and UK at three call centres based in different parts of country and it was communicated to Air Express’ office, which in turn received their supplies from multiple suppliers at Sangli, Ludhiana and Delhi. These were packed by the company in courier covers and sent to Delhi, from where they were sent abroad by Speed Post as medical samples. While the investigation is in process, eight people have been taken into custody. While six of these eight accused were detained in Mumbai, the other two were detained in Chandigarh and another part of Maharashtra. They will be produced in court on Thursday.

The seizure also includes four high-end cars including an Audi and a Range Rover.

Out of these three call centres, two are located in Maharashtra and the third is located in Chandigarh. According to sources, the group has been using the same method to smuggle the drugs but its frequency increased from the year 2009 onwards. Sources also claimed that at least six of the eight would be arrested as they are directly involved in the crime. “A search for these people began on Monday itself, but they were detained and taken to the DRI office late on Tuesday night. It took almost 24 hours to seize the total stock from the premises of these offices in Mira Road (east),” said an official. Sources revealed that DRI officials received information about the substances from Ludhiana.

Psychotropic substances like Alprozolam, Diazepam, Nitrazepam, Zolpidem, Amphetamine etc are normally used as sedatives and mood elevators. They are otherwise available strictly under medical licensing. The legal market value of these substances is not more than Rs 5 per tablet. However, when abused, their value depends on how much one is prepared to pay for it.