After his death, the Wadala GRP registered an offence of abetment to suicide against five persons. 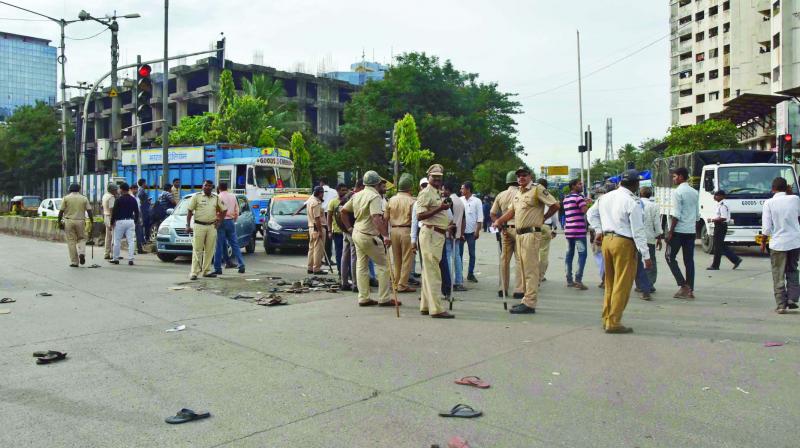 Policemen assess the situation after the chaos broke out in Chembur on Tuesday.

Mumbai: The Mumbai police on Wednesday arrested 33 people and booked around 200 for allegedly attacking policemen and damaging vehicles during the funeral procession of a man who allegedly committed suicide following the kidnapping of his 17-year-old daughter.

The deceased, Pancharam Rithadiya, 44, who allegedly jumped in front of a running train at Tilak Nagar railway station last week, claimed in his ‘suicide note’ that the police had failed to trace his daughter who was kidnapped some months ago.

After his death, the Wadala GRP registered an offence of abetment to suicide against five persons.

On Tuesday, during his funeral procession in Chembur, mourners allegedly hurled stones at the police and vandalised a police van, among other vehicles, additional commissioner of police (east region) Lakhmi Gautam said.

The officer said the police was analysing CCTV footage and videos that have gone viral on social media to identify those who indulged in violence.

“Seven police personnel, including four officers, were injured in the attack,” he said.

A police van, a taxi, a car, 10 to 12 motorcycles and three auto-rickshaws were damaged in the incident, another police official said.

The police were also examining two audio clips, in which some persons are heard discussing a plan to attack a police station to 'take revenge' for the police action during the mob violence, police official said.

The accused have been booked under various Indian Penal Code Sections, including 143, 145, 147 (rioting), 307 (attempt to murder), 326 (voluntarily causing grievous hurt by dangerous weapon), 353 (assault or criminal force to deter public servant from discharge of his duty), the Prevention of Damage to Public Property Act and the Maharashtra Police Act.

A police officier on Tuesday said some mourners trailing the procession tried to block the road at Umarshi Bappa Chowk in Chembur.

As police officers tried to remove the protesters, some of them ran to a nearby under-construction building and hurled stones, injuring two police constables and a traffic police officer.