Government issues circular, says action should be taken as per the 2015 HC order. 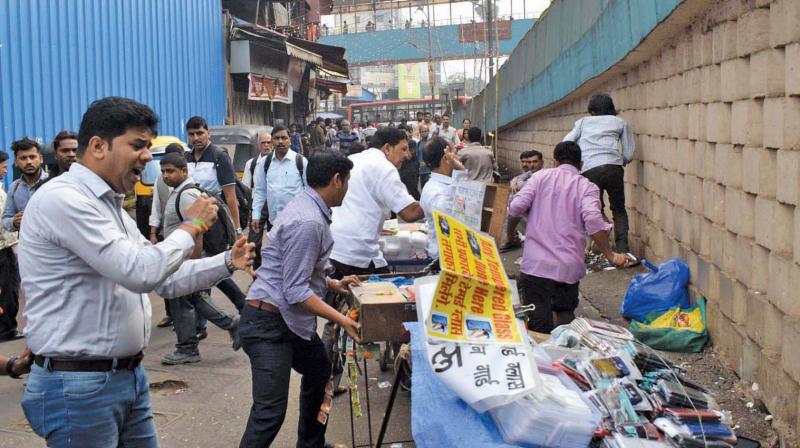 Mumbai: On the backdrop of growing discontent against illegal hawkers in the city, the government has asked the Brihanmumbai Municipal Corporation (BMC) and railway authorities to act tough against unauthorised vendors in the vicinity of railway stations. There should be no hawking on footbridges and overbridges, the government said.

In a circular issued to BMC and railway officials, the government has said that action should be taken as per the ruling given by the High Court on October 23, 2015. The HC had laid down certain restrictions and conditions for the hawkers to do business.

“There should be no hawking within 100 metres from any place of worship, holy shrine, educational institutions and hospitals or within 150 metres from any municipal or any other markets or from any railway station. There should be no hawking on footbridges and overbridges. Further, certain areas may be required to be kept free of hawkers for security reasons,” the HC order said.

Acting on the government’s directives, the BMC and railway authorities have decided to demarcate the land in the city’s railway station areas so that they can initiate joint action against illegal hawkers, who cause inconvenience to people.

In a meeting held on Monday between the railway and BMC authorities it was decided that the assistant municipal commissioners across BMC’s 24 wards would be the coordinating officials while taking action against hawkers.

The ward officials would also be empowered to hire private vans if required for seizing goods. There are currently only two vans available at the ward levels, which are used for confiscating goods.

However, the additional vans would be allowed only if the earnings from the goods confiscated are 1.5 times more than the cost of hiring.

“It has been decided to physically demarcate the land of the railways and the BMC. Besides we have also asked for a list of stations from the railways where the hawker problem is acute and action needs to be taken up on priority,” said a senior civic official.