In a meeting earlier this week with party chief Uddhav Thackeray, the Sena leaders had expressed their discontent with the BJP. 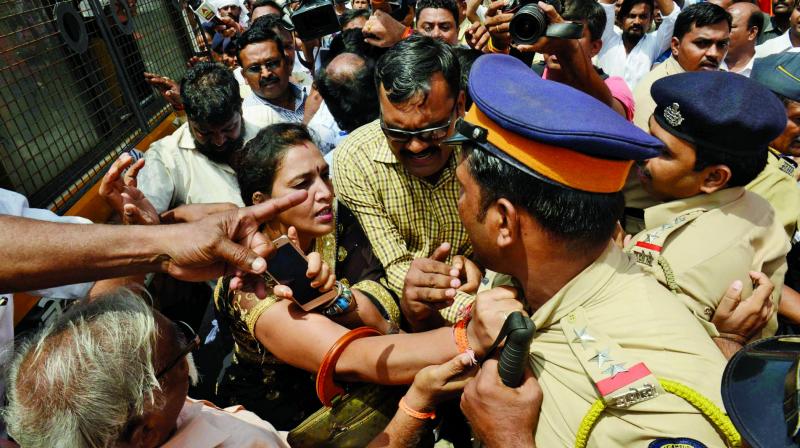 Mumbai: The rivalry between the Bharatiya Janata Party (BJP) and the Shiv Sena, who are part of the ruling NDA, touched a new low on Saturday when the Shiv Sena carried out a mock funeral of Prime Minister Narendra Modi. The party members also shouted slogans of, “Why so many people? To attend Modi’s funeral.” The agitation was led by Sena MPs, ministers and MLAs against inflation and fuel hike. However, the BJP was quick to remind the Sena that its MPs had won the elections because of the Modi-wave, a fact they seem to have forgotten.

In a meeting earlier this week with party chief Uddhav Thackeray, the Sena leaders had expressed their discontent with the BJP. There were reports that the Sena will not continue their alliance with BJP for long.

protests at 12 places in the city, including Borivali, Chhatrapati Shivaji Maharaj Terminal (CSMT), Kurla, Jogeshwari, Ghatkopar, Dadar, Bhandup. In Chembur, the Sena workers shouted slogans of  -“Why so many people? To attend Modi’s funeral,” which sparked the controversy. They also displayed photos of BJP’s protests against inflation in 2014. The Sena leaders condemned the BJP-led government for inflation, which is hitting the common man. The party has also threatened to launch a nation-wide stir if fuel prices were not brought down.

BJP Mumbai president Ashish Shelar reacted on Twitter, saying that those shouting the slogans against Mr Modi were the same people who had won the elections riding the Modi wave. “One has a long life if death slogans are raised against one,” he tweeted. “These people won the elections due to (PM Narendra) Modi ji. They are sitting in power, and yet raising slogans against Modi ji,” the BJP leader said.

Sena MP Anil Desai and Arvind Sawant held protests at CSMT and were later detained by the police. “The wrong policies of the BJP are responsible for the inflation in the country. We will continue our agitation if the state government and the Centre do not take immediate steps to prevent the inflation,” Mr Desai said.

“Today, the government is taking decisions without taking anybody into confidence. Mr Modi should go through the speeches he delivered before becoming the PM, when the fuel prices went up during the Congress rule,” Mr Sawant said.

Many women leaders and workers participated in Saturday’s agitations and were led by Nilam Gorhe, Sheetal Mhatre, Snehal Ambekar and Kishori Pednekar. The Sena has been lashing out at the BJP through its mouthpiece Saamana on various issues, including load shedding and the bullet train project. This time, it has taken up the petrol and diesel hike and its impact on essential commodities.