A truck driver and his assistant suffered minor injuries early Tuesday after boulders from Malshej ghat crashed on the truck due to heavy rain. 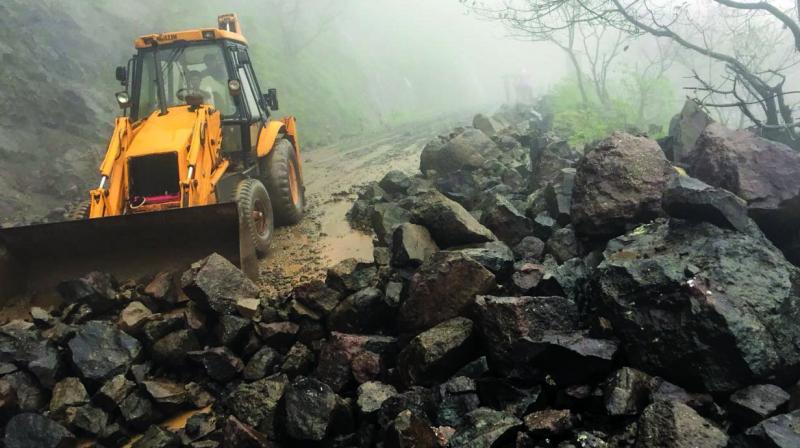 Debris at the Malshej ghat after landslide.

Mumbai: Three days after the Malshej ghat landslide, national highway (NH) 61, a vital link to Mumbai and other areas via Murbad taluka in Thane district, may remain closed for another two to three days as the debris has not yet been cleared.

Senior police inspector of Tokawade police, Thane rural, Dhananjay Pore, told The Asian Age that owing to heavy rain and boulders falling from the ghat, the work of cleaning the debris had to be stopped. The road may be opened to traffic in another two or three days. He also said that the JCB, used to clean the road, had itself been the target of falling boulders on Thursday.

Meanwhile, executive engineer of national highway of Thane division, Dinesh Mahajan, said that partial clearance of the landslide had been done on Thursday. One lane had been cleared but minor rocks were still falling along with muddy water flowing at the site of the landslide. So, he said they would wait for another day to clear it.

Asked when the road would be reopened to traffic, Mr Mahajan said that it would take another day. A review would be held Friday evening before opening the road to traffic.

Officials said that incessant rain along with falling rocks were posing a problem while clearing the debris which is why the exact date could not be announced as to when the road would be opened to traffic.

With NH 61 closed down, those headed to Ahmedn-agar should either take the Mumbai-Pune road or travel via the Mumbai-Nashik road.