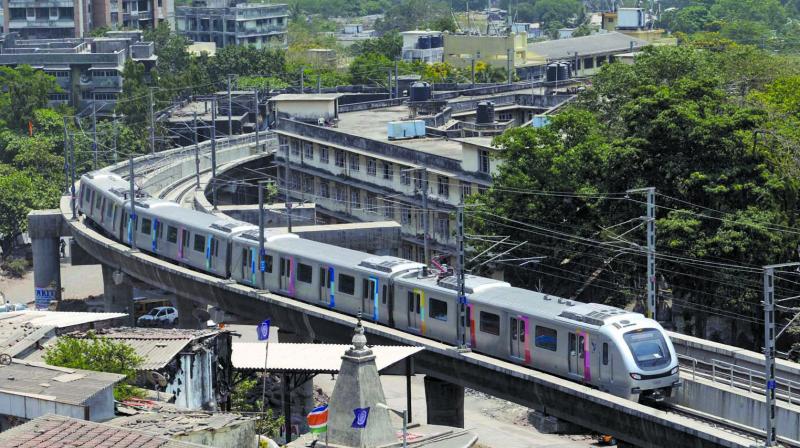 The state Cabinet, in a meeting chaired by chief minister Devendra Fadnavis, has approved the building of three metro corridors — lines 10, 11 and 12 — worth Rs 19,080 crore in the Mumbai Metropolitan Region (MMR).

Mumbai: The state Cabinet, in a meeting chaired by chief minister Devendra Fadnavis, has approved the building of three metro corridors — lines 10, 11 and 12 — worth Rs 19,080 crore in the Mumbai Metropolitan Region (MMR).

Line 10 will connect Gaimukh to Shivaji Chowk in Mira Road, line 11 will connect Wadala to Chhatrapati Shivaji Maharaj Terminus (CSMT) and line 12 will connect Kalyan to Taloja. The move will bring about a 50-kilometre-long metro network in the region and all three lines are expected to be completed by 2026.

An official from the chief minister’s office (CMO) said that 8.52 kilometre of the Metro 10 project would be elevated and the remaining 0.68-km stretch would be underground.

He added that 14.32 lakh commuters would use the line, which will connect Mumbai city, Borivali, Mira-Bhayander and Thane city.

While four kilometres of the Metro 11 line will be elevated between Wadala and Sewri, the remainder of the corridor — between Sewri and CSMT — will be underground.

The deadline for the completion of the Metro 11 line is 2022 and approval has been given to seek loans from the World Bank, New Development Bank, Japan International Cooperation Agency for the project, which will also be bankrolled by the state government and MMRDA.

The Metro 12 is expected to be completed by 2024, the official said. The Mumbai Metro project was launched by former prime minister Manmohan Singh in June 2006 and construction work began in February 2008. Commercial operation commenced from June 8, 2014.

Currently, only Line 1 between Versova in Andheri and Ghatkopar is operational. Other lines are under various stages of completion.