The Navy’s Dornier took the ONGC team to the platforms where the leak was plugged. 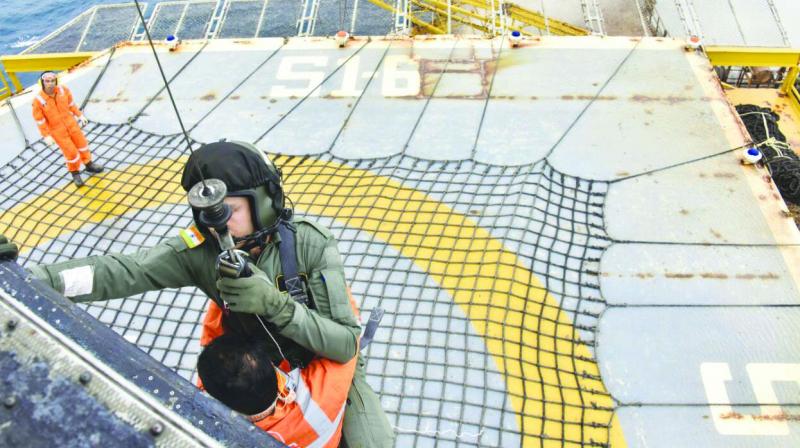 The repair team had to be winched down from a helicopter.

Mumbai: A gas leak on the offshore oil drilling station Bombay High, which is located off the Mumbai coast, was plugged on Sunday after the Indian Navy received a distress call from the Oil and Natural Gas Corporation (ONGC). The unmanned platforms are operated by the ONGC, which tried to rush their helicopters to the spot but — owing to the then-rough weather — it sought the Navy’s help. The Navy’s Dornier took the ONGC team to the platforms where the leak was plugged.

“A gas leak was reported onboard the offshore ONGC platform S1-6. Since the ONGC field helicopters could not undertake the mission due to adverse weather conditions, Indian Navy was requested for assistance. The Indian Navy launched a Seaking 42C helicopter to transfer the ONGC technical team to the platform so that repairs could be undertaken (sic),” stated a release issued by the Indian Navy.

The naval helicopter had to undertake this mission in challenging circumstances, officials said, adding that the winds were strong and gusting winds of over 30 knots. Due to the small size of the helipad on the imperilled offshore platform, the repair team had to be winched down from the helicopter.

The mission was carried out with skilful precision and helped to avert a potentially dangerous outcome.