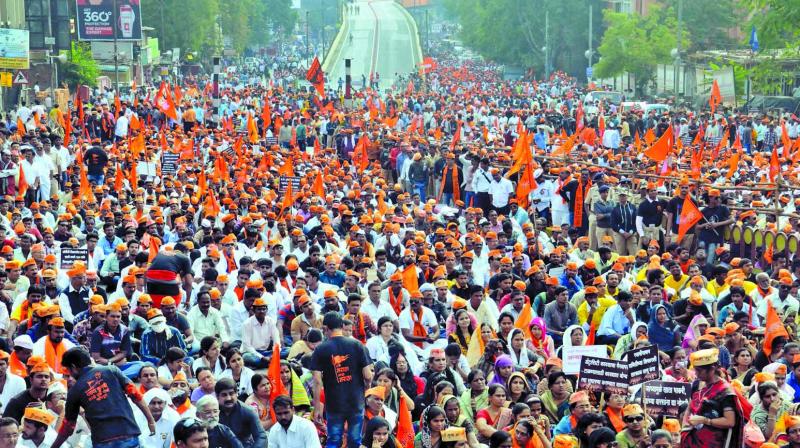 The protesters have refused to take possession of Shinde’s body until the chief minister resigns. (Photo: PTI)

Mumbai: Kakasaheb Shinde, a 28-year-old unemployed man from Aurangabad, jumped to his death into the Godavari River from Kaigaon Bridge on Monday while participating in the agitation of the Maratha Kranti Morcha (MKM) on the issue of reservation for the Maratha community.

Following this, the MKM called for a state-wide bandh. However, the group said that it will not stop public transport and emergency services from operating.

The agitation could prove to be the toughest test so far for chief minister Devendra Fadnavis, who has earlier managed to defuse tensions after various agitations including that of farmers and dalits. The protesters have refused to take possession of Shinde’s body until the chief minister resigns.

The MKM has been demanding the immediate implementation of reservations for the Maratha community and a halt to state government recruitments until then.

A group of Maratha protesters had threatened a ‘jalsamadhi’ agitation in Aurangabad on Monday. They gathered at Kaigaon Bridge on Godavari River, but the police prevented them from jumping into the river.

The police immediately got into action and retrieved Shinde. He was taken to a nearby hospital, but died before admission.

After Shinde’s death, Maratha protesters intensified their agitation by sitting on a ‘dharna’ at Gangapur police station, demanding an FIR of abetment to suicide against Mr Fadnavis. Maratha Kranti Morcha agitators have also started a ‘rasta roko’ on Aurangabad-Ahmednagar highway and damaged a dozen vehicles, including a police van and a bus, in Gangakhed tehsil of Parbhani district. They held a sit-in protest at the Gangapur police station in Aurangabad district, demanding that criminal case be filed against the chief minister over Shinde’s death. Seeking immediate announcement of reservations for the Maratha community, the protesters also sought a compensation of `50 lakh for Shinde’s family. In the last few days, protests have take place in Buldhana, Akola, Parali, Washim and even in Mumbai.

The Maratha agitation entered its sixth day on Monday. The MKM was formed in 2016 for organising protest marches. The body had also warned Mr Fadnavis that it wouldn’t allow him to perform a puja at Pandharpur’s Vitthal Temple.

The Maharashtra chief minister performs this puja every year. However, Mr Fadnavis skipped his Pandharpur trip to avoid any untoward incidents.