The incident comes a day after a family of three hanged themselves in Cuffe Parade’s Machhimar Nagar early on Friday. 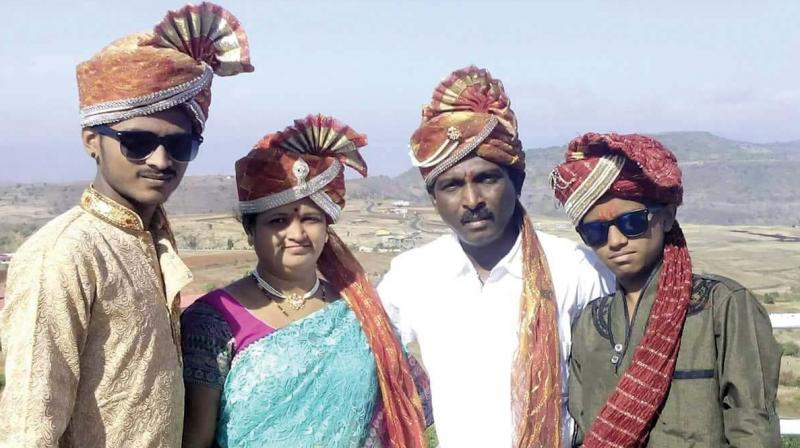 The four deceased in happier times.

Mumbai: A couple — Rajesh Bhingare (47) and his wife Ashwini (45) — committed suicide by consuming rat poison along with their sons, Tushar (23) and Gaurang (17), a day before their 25th wedding anniversary.

The Kherwadi police recovered a suicide note, which stated that the family was in the grip of a financial crisis. The police has registered an accidental death report.

The incident comes a day after a family of three hanged themselves in Cuffe Parade’s Machhimar Nagar early on Friday.

Police said that Rajesh, who worked as a peon in the office of Nationalist Congress Party (NCP) MLC Dhananjay Munde at Mantralaya, was allegedly depressed and facing a financial crisis.

On Saturday, when a neighbour knocked on the Bhingares’ door to pick up wheat flour, nobody answered. A few moments later, she banged the door again, which opened slightly. Through the opening, she saw that the family lying still with bed sheets on their bodies.

Rajendra Patil, senior police inspector at Kherwadi police station, said, “The family consumed rat poison between midnight and noon. The time of death will be confirmed after the post-mortem report.”

One of the neighbours said that the Bhingares was trying to buy property in Panvel on a budget of `15 lakh, and had almost finalised a deal. However, after they encountered a few financial hurdles, they lost the deal. “Tushar was studying hotel management in Chetana College. This was in his final year, and the family was preparing to send him abroad to pursue further studies,” said a neighbour, Nitesh Mijari.

Sai Chavan, a classmate of Gaurang, said, “Gaurang was a very bright student and aspired to be a chartered accountant someday.”

Another neighbour said Rajesh was a soft-spoken and jolly person while Ashwini was a hardworking woman, who sold readymade dress pieces along with food items. Ashwini used to grind wheat into powder, as an additional source of income for the family, said a neighbour. Rajesh’s sister Bharti, who occasionally stayed with the family, said, “My brother never mentioned financial problems nor did he share his problems with us. Had he opened up, we would have talked him out of it.”

Another sister, Vaishali Sonawane, said, “Rajesh had organised a small get-together for his silver jubilee where all family members were invited. A day before the party, why did they take this extreme step?”