In the neighbouring cities, the BJP-Sena alliance is all set to retain the Palghar (ST), Bhiwandi, Kalyan and Thane Lok Sabha seats. 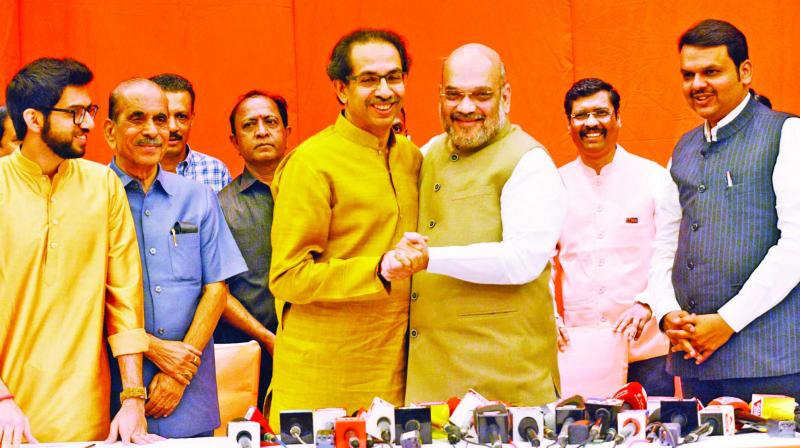 Continuing its dominance over the Mumbai city, the Bharatiya Janata Party-Shiv Sena alliance swept all the six seats in the city repeating its impressive 2014 performance.

Mumbai: Continuing its dominance over the Mumbai city, the Bharatiya Janata Party-Shiv Sena alliance swept all the six seats in the city repeating its impressive 2014 performance.

Even Maharashtra Navnirman Sena chief Raj Thackeray’s fervent appeal to voters not to vote for the saffron parties did not make a difference as the Congress-NCP combination won just one seat in the state.

Shiv Sena’s Arvind Sawant, Rahul Shewale and Gajajan Kirtikar held their seats of Mumbai South, Mumbai South Central and Mumbai  North West respectively, whereas for the BJP, Gopal Shetty and Poonam Mahajan managed to retain their seats in Mumbai North and Mumbai North Central. The party’s decision to field Manoj Kotak in Mumbai North East  instead of sitting MP Kirit Somaiya paid rich dividends as he won the seat with a margin of 2.26 lakh votes. In the neighbouring seats of Thane, Kalyan, Palghar and Bhiwandi, the BJP-Sena candidates romped home with comfortable margins indicating the alliance’s total dominance over the Mumbai metropolitan region.

Compared to the 2014 Lok Sabha elections, the victory margins of the BJP-Sena candidates have  fluctuated in some seats. Mr Shetty has retained his Mumbai North Lok Sabha seat against his Congress rival Urmila Matondkar with a margin of 4.65 lakh votes.

In South Central Mumbai, Sena MP Mr Shewale retained his seat against the Congress rival Eknath Gaikwad by a margin of over 1.52 lakh votes.

The Congress was hoping to win back the South Mumbai seat as his candidate Mr Deora was endorsed by prominent industrialists like Mumbai Ambani and Uday Kotak. However, sitting Sena MP Arvind Sawant managed to retain the seat with a margin of over one lakh votes. 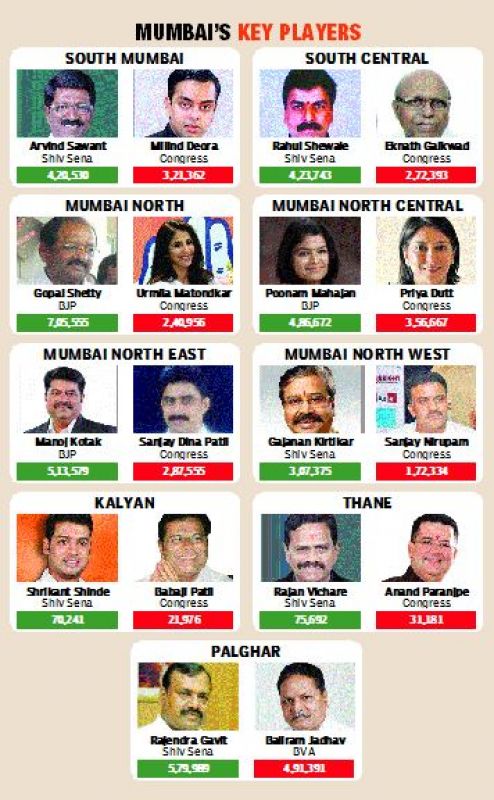 Commenting on the results, Mr Shewale said, “I dedicate this win to the late Shiv Sena chief Balasaheb Thackeray. It is due to the development work that I had performed in the last five years that people have given me the opportunity to serve them again.”

Congress star candidate Ms Matondkar accepted the defeat by saying, “I will continue my journey in politics. I was preparing for this long and exciting journey since a month. It is the spirit of a person that matters.”

In the neighbouring cities, the BJP-Sena alliance is all set to retain the Palghar (ST), Bhiwandi, Kalyan and Thane Lok Sabha seats.

In Palghar, Sena candidate Rajendra Gavit, who was earlier with the BJP, won by a margin of 88,883 votes. He defeated Baliram Jadhav of Bahujan Vikas Agadhi. Mr Gavit polled 5,79,989 votes while Mr Jadhav got 4,91,391 votes.  In Bhiwandi, BJP’s sitting MP Kapil Patil was leading over his nearest Congress rival Suresh Taware by a margin of 41,765 votes.