Metros   Mumbai  24 May 2018  Environment meet will be held over bullet train
Metros, Mumbai

Environment meet will be held over bullet train

Meanwhile farmer groups have stated that they are going to agitate during the meeting on May 29 as they do not want to give their lands. 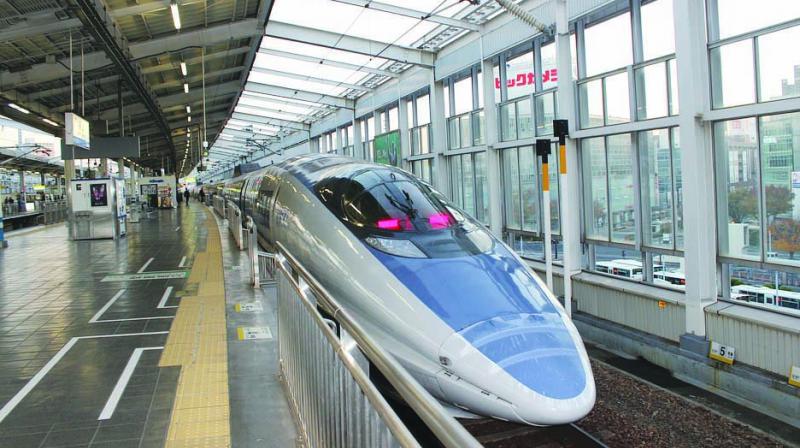 The estimate cost for the project is 1.08 lakh crore.

Mumbai: An environment consultation meeting with public for the proposed Mumbai - Ahmedabad bullet train project is going to be held in Gadkari Rangayatan, Thane on May 29 amid confusion over its complete impact on Palghar and Thane among residents and activists working to prevent land acquisition.

They claimed that complete EIA report stating the impact of the project on environment and lands is not available online. As such they have demanded more transparency in the process.

Another public consultation for Mumbai areas will also be held on May 30 at Mumbai suburban district collector office at Bandra. Around 353 hectares of land in Maharashtra will be acquired for the 508 km long Mumbai-Ahmedabad bullet train project. The corridor will pass through as many as 109 villages that the bullet train corridor would pass Palghar district.

“We do not have complete information on which specific lands will be acquired in these districts and how many farming lands will be lost for the project because they have not mentioned in the feasibility report uploaded on the website. Even the report is not complete. As such there is no transparency in the consultation process,” said Brian Lobo, member of Kashtakari Sangathna, a farmers organisation opposing the bullet train.

“There is no complete lay-out provide details of the coastal regulation zone (CRZ) areas and environmentally sensitive areas that it is going to pass through. As such the citizens attending consultation meeting will not be able to provide suggestions and objections for the project. In the website too, all documents regarding impact on environment is not uploaded, one has to go to district collector office to collect them,” said Samir Vartak, an environment activist from Palghar.

The estimate cost for the project is 1.08 lakh crore out of which Japan International Cooperation Agency(JICA) will provide financial aid of Rs 88,000 crores.

Meanwhile farmer groups have stated that  they are going to agitate during the meeting on May 29 as they do not want to give their lands.