The horses were found without their owners, and the police is searching for them. 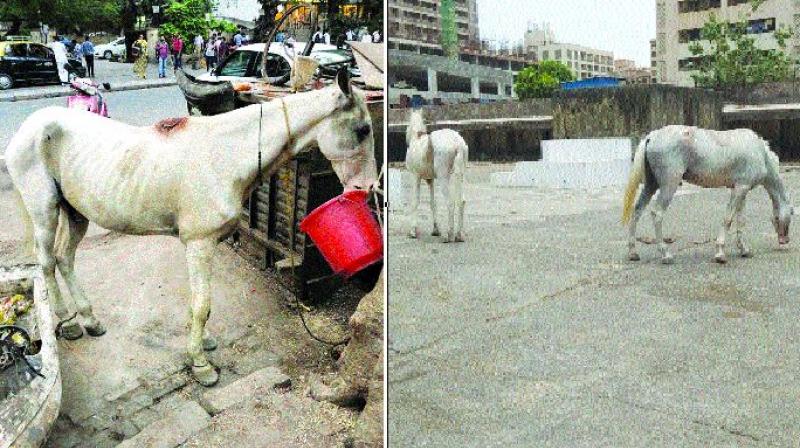 The two horses were found in a malnourished condition with severe injuries.

Mumbai: Acting on a tip-off, the Cuffe Parade police station on Wednesday rescued two male horses that were allegedly being used for joyrides at Nariman Point, south Mumbai, without being provided food, water or shelter.

The police found the horses to be thin and malnourished with their ribs jutting out and with several injuries. The horses were found without their owners, and the police is searching for them.

The Cuffe Parade police has filed a first information report (FIR). A police source said, “Both horses had multiple large wounds with one of them carrying an infected one.”

After being rescued, the horses were sent to the BMC cattle pound in Malad for medical examination and immediate veterinary care.

DCP zone 1, Dr Manoj Sharma told The Asian Age, “Acting on a tip-off, we rescued the horses and sent them to the cattle pound in Malad for further treatment.”

“No arrests have been made in this case but we have registered a FIR under various sections of the Prevention of Cruelty to Animals Act, 1960, and the further investigations are underway,” Dr Sharma said.

The Cuffe Parade police has registered a FIR against the custodians of the horses under sections 3, 11(1)(a), (f), and (h) of the Prevention of Cruelty to Animals Act, 1960.

The police took the help of PETA volunteers in the operation. The police is likely to crackdown on others using horses for joyrides which are banned in the city.

PETA emergency response coordinator Meet Ashar told The Asian Age, “Keeping horses in the city is illegal and using them for joyrides is cruel yet sick, malnourished and injured horses are forced to live in filthy unlicensed stables and are not provided with basic needs such as food, water and shelter.” PETA India is working with the police and Brihanmumbai Municipal Corporation to give neglected horses the care they need. The organisation is calling on the authorities to immediately implement Maharashtra’s rehabilitation plan for carriage horse-owners and drivers.