32 agriculturalist bodies say some are trying to divide protesters. 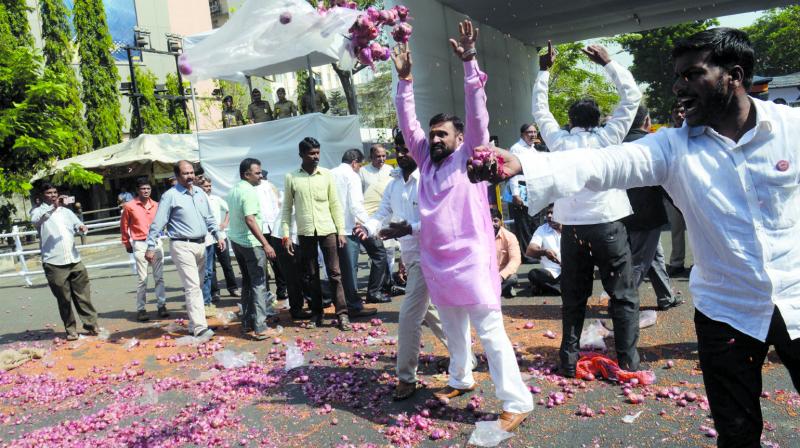 Rebutting claims related to cancellation of the agitation, the 32 farmers’ bodies reiterated their resolve of going ahead with the proposed protest.

Mumbai: The proposed farmers’ strike from June 1 is receiving state-wide support with around 32 farmers’ organisations and other bodies throwing their collective weight behind it, even though the state government attempted to stop the strike when it interacted with their representatives. Rebutting claims related to cancellation of the agitation, the 32 farmers’ bodies reiterated their resolve of going ahead with the proposed protest.

“We will continue our agitation. A few leaders tried to divide farmers’ unity. But they will never succeed,” said a representative of the Kisan Kranti Sanghatana, an umbrella organisation supporting the agitation. The farmers’ strike and agitation is being planned under the banner of Maharashtra State Kisan Kranti Sanghatana. Farmer organisations also slammed Opposition leader Radhakrishna Vikhe-Patil for trying to divide protesters in order to help the state government.

Representatives of Kisan Kranti Sanghatana met in Puntambe village of Ahmednagar on Sunday to decide the next course of action. A total of 32 different organisations, including three major farmer organisations, sent their representatives to this meet. Puntambe is the first village in Maharashtra that passed a resolution to hold a farmers strike in the state. Later almost 2,500 villages did the same, which put pressure on the government.

Now Kisan Kranti Sanghatana has decided to launch a seven-day sit-in protest from May 25. It will be a state-wide agitation and the nerve centre of the protest will be Puntambe. From May 25 to May 31, all farmers will do bhajan and kirtan to create awareness about agricultural issues in the state. The families of farmers are also expected to participate in the protest.

After May 31, organisations are planning to launch a “strike” in which farmers will not sow seeds for the coming Kharif season. “As government is not supporting farmers despite a huge crop yield this year, then what is the use of doing farming? That’s why we have decided to go on strike to show the power of farmers,” said Jayaji Suryavanshi, a farmer leader from Aurangabad.

“We have conveyed our message to the government. The BJP had assured to implement the Swaminathan Commission’s report. But they didn’t keep their word. Now we have no choice than to agitate,” said Anil Dhanavat of Shetkari Sanghatana.

“Our agitation has no political affiliation. If any political party decides to support us then it’s their decision. But we are planning a non-political agitation,” said Raghunathdada Patil, a farmer leader.

SWAMINATHAN’s RECOMMENDATIONs
Professor M.S. Swaminathan had, for ‘faster and more inclusive’ growth of the agriculture sector, submitted five reports to the central government from 2004-2006. Since then there has been a demand to implement the recommendations of the Commission. They include:

Allegations against Opp. leader
Opposition Leader in the state Assembly Radhakrishna Vikhe-Patil is under fire from all organisations participating in the agitation for trying to divide farmers’ unity. Mr Vikhe-Patil was present in a meeting with chief minister Devendra Fadnavis when some farmers from neighbouring villages in Ahmednagar district met Mr Fadnavis for a discussion over their demands. In the meeting, the CM is said to have accepted to various demands that they made. But now, Kisan Kranti Sanghatana claims that Mr Vikhe-Patil tried to break the agitation to help the government. Protesters also called Mr Vikhe-Patil’s participation in the opposition’s ‘Sangharsha Yatra’ as merely symbolic.

Agitation for farmers
The proposed strike will be the second significant non-political agitation over farmers’ issues in the state in the last three months. It will also be the sixth such agitation for farmers’ issues. Initially Congress, Nationalist Congress Party (NCP) and other opposition parties held the state-wide ‘Sangharsha Yatra’ over the farmer loan waiver issue. After this, Independent MLA Bachchu Kadu also launched his yatra for farmers’ demands. Ruling partner Shiv Sena launched ‘Shetkari Sampark Yatra’ and will
continue it for the next one month.