MMRDA plans to start work of BWSL-BKC flyover from June. 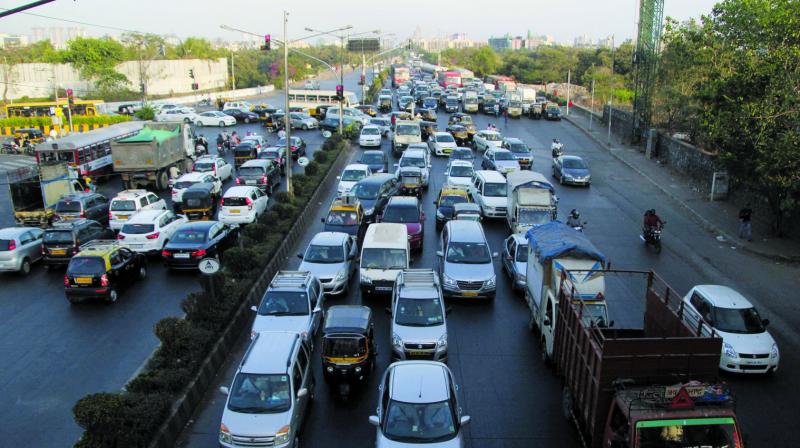 Construction of this flyover is part of MMRDA’s plan to decongest Kalanagar junction by building a maze of four flyovers connecting BKC with BWSL and Dharavi. (Photo: Mrugesh Bandiwadekar)

Mumbai: Now anticipate more traffic jams and bottlenecks if you are travelling via the Kalanagar junction. Reason being the Mumbai Metropolitan Region Development Authority (MMRDA) plans to begin civil construction work for the 1.6-km-long flyover connecting the Bandra end of Bandra-Worli Sea Link (BWSL) with Bandra-Kurla Complex (BKC) at Kalanagar junction from June.

Construction of this flyover is part of MMRDA’s plan to decongest Kalanagar junction by building a maze of four flyovers connecting BKC with BWSL and Dharavi. Construction of these two had hit a roadblock due to the proposed Metro-2B corridor between D.N. Nagar and Mankhurd and the BKC arm of BKC-BWSL flyover crisscrossing each other, after which, MMRDA had to tweak alignment of the flyover.

The residents of Bandra have expressed their reservations. “The proposed flyover will surely help motorists plying on the Kalanagar junction route but that does not mean that the traffic on the roads will reduce. With more roads there is equal increase in the number of vehicles,” said Naeem Jaffri, a Bandra resident.

UPS Madan, metropolitan commissioner, MMRDA, said, “We have tweaked the alignment and have decided that there will be a common pier for the BKC-BWSL flyover and proposed Metro-2B corridor. The traffic department’s permission will be in shortly, and we will start work in another ten to fifteen days.”

Currently, the stretch between Kalanagar and BKC sees motorists at a crawling pace, resulting in traffic jams during peak hours as traffic merges there from five directions including Dharavi T-junction, BWSL, WEH (western express highway), Kalanagar and BKC. A study by MMRDA revealed that every hour, more than 12,000 cars pass through the Kalanagar junction, compelling the authority to plan construction of flyovers to decongest it.

In the first phase, there will be two flyovers; one from BKC to BWSL and the other from BWSL to BKC to be constructed in such a way that they will be supported by a stilt road, on government land, running from Dharavi towards BWSL.