Following this incident, the unidentified shooter shot Sawant in the chest by firing three rounds. 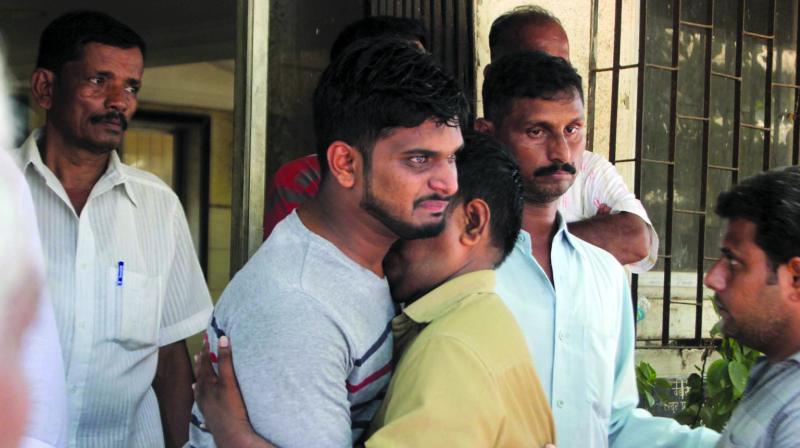 The deceased’s son, Omkar Sawant, at the funeral.

Mumbai: A day after a Shiv Sena deputy shakha head was shot dead at Kurar in Malad, the police has recovered the CCTV footage wherein it is seen that two men had attacked the deceased, Sachin Sawant (45) in Gokul Nagar and after committing the crime, they fled on their motorcycle.

The man who shot him was on foot and had attracted the attention of the victim, by addressing him as ‘Bhau’ (brother), the name he was fondly referred by in the locality. The other assailant was wearing a helmet.

According to police sources, the incident took place at 8.05 pm, when a man called out to Sawant in Gokul Nagar on Sunday evening, and as Sawant was on his motor cycle, he stopped for a while. Following this incident, the unidentified shooter shot Sawant in the chest by firing three rounds. As soon as the shots were fired, the shooter ran towards the end of the narrow lanes of Gokul Nagar, sat on a bike, which was ready to leave, and fled from the crime scene. However, an onlooker saw the face of the shooter, and gave a sketch to the police.

Udaykumar Rajeshirke, senior police inspector of Kurar police station said, “The CCTV footage clearly shows the bike fleeing the scene. We have recovered the footage and our best shot to nab the unidentified accused is to track down the vehicle’s registration number. The investigation is underway”. The police had detained a biker on Sunday to ask him a few questions, as he was allegedly stalling on Sawant’s route. The police are ascertaining if he was a part of the murder plot.